With the midterm elections less than a day away, Muslims are increasingly shifting their votes to the Republican Party, members of the Muslim community told the Daily Caller News Foundation.

Muslims increasingly see a parallel between Islamic fundamentals and traditional values of the Republican party, including community and religion, community members told the DCNF. Sexually explicit content in schools has become a hot-button issue among the demographic, with Muslim community members revolting in Dearborn, Michigan, against sexually explicit books found in the Dearborn School District libraries. (RELATED: ‘This Is Truly About The Kids’: Parents Challenging Explicit Content In Schools Respond To ‘Book Banners’ Label)

“There’s so much coherence between classical Republican values and basic Islamic fundamentals,” Independent Women’s Forum Senior Fellow Quanta Ahmed told the DCNF. “There’s not really much of a conflict. In America, many Republican values encompass a value of God and country.

“In Islam, we by default, must believe in God as one and overarching power and guide and we have actually three duties as Muslims, a duty to God, a duty to society and a duty to oneself. In fact, those are the two duties are not often mentioned and it said informally, that more than 90% of Islam is about serving your community,” Ahmed added. “So many of the very traditional basic Republican values, God and country, are very resonant with Muslims.”

At the Oct. 10 Dearborn School Board meeting, protestors gathered to speak out against books such as “This Book Is Gay,” a book that gives the “ins and outs of gay sex,” and “All Boys Aren’t Blue,” a descriptive memoir of a queer, black boy, which can be found in the school libraries. Protestors chanted “vote them out” and held up signs reading “Homosexuality Big Sin” and “Keep Your Dirty Books In The Closet.”

Across the nation, Republican politicians have mirrored Muslim concerns over sexually explicit content in the classroom; Republican Michigan gubernatorial candidate Tudor Dixon called out Democratic Michigan Gov. Gretchen Whitmer for being silent on the presence of pornographic material in the classroom.

In Virginia, Republican Virginia Gov. Youngkin’s administration drafted model policies that would require school districts to notify parents if “sexual explicit content” is in the classroom. In May, Utah’s Republican legislature made HB 374 a law, prohibiting books with pornographic and sensitive content from the classroom.

Stephanie Butler, a parent within the Dearborn Public School District, has been working with the Muslim community to push back against sexually explicit content in the school district’s libraries.

Butler told the DCNF that Muslims want to protect their children and that the Democratic Party is threatening children.

From 2018 to 2020, shifts to the Republican Party appeared to be the most pronounced among the Muslim community in comparison to other faith groups such as Catholics, Jews, Protestants and Mormons, according to data by the Associated Press VoteCast.

In 2011, 46% of Muslims said they aligned with the Democratic Party, according to a Pew Research Poll. About 11% of Muslims identified with the Republican party.

Yet, from 2019 to 2020, Muslims’ approval rating of former President Donald Trump increased from 16% to 30%, according to a poll by the Institute for Social Policy and Understanding. 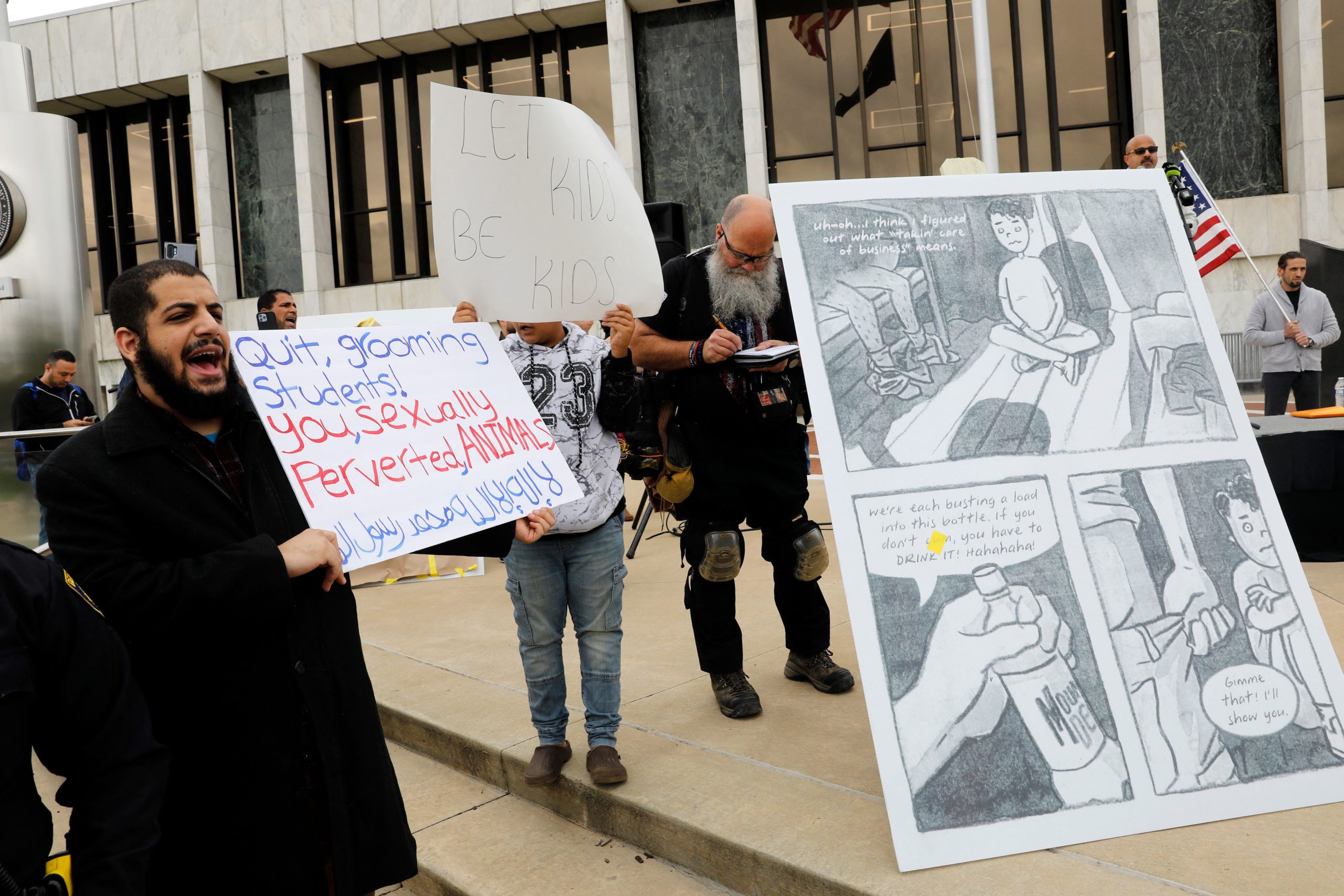 Demonstrators who support banning books gather during a protest outside of the Henry Ford Centennial Library in Dearborn, Michigan, on September 25, 2022. – The protests emerged after Dearborn Public Schools temporarily restricted access to seven books following a parent’s complaint about their content. They also restricted access to an e-book app featuring thousands of titles. (Photo by JEFF KOWALSKY / AFP) (Photo by JEFF KOWALSKY/AFP via Getty Images)

Hassan Nehme, former Republican Michigan candidate for the House of Representatives, told the DCNF that the shift in the Muslim community’s vote can be connected to the Republicans and their protection of faith and the Constitution.

“The Republican platform itself, it kind of keeps values to hold true to the Constitution and the values and morals and principles that God set forth on our Nation,” Nehme told the DCNF. “The progressives, anything that has to do with God, they’re trying to strip it all away because if you remove God from the scene, and our Constitution was founded on the principles given by God, then if God’s out of the picture, then those rules that were given by him don’t really apply anymore.”
Ahmed told the DCNF that the Muslim community values will be reflective in the polls.

“The child’s mind and the United States needs to be more safely guarded, more sanctified, more protected than maybe any other asset we have for our nation’s future,” Ahmed told the DCNF. “I think that’s why you’re gonna find many more Muslims voting Republican, but not not necessarily telling everybody.”