Comedian Bill Maher pushed back against author and podcaster Sam Harris who tried to claim news organizations didn’t have time to verify the Hunter Biden laptop.

The duo were discussing the infamous Hunter Biden laptop story, which was made public by the New York Post just weeks before the 2020 presidential election. The story was immediately censored on Twitter and other social media platforms while other news organizations dismissed it as Russian propaganda.

The Daily Caller News Foundation almost immediately was able to verify the authenticity of the contents after obtaining a full copy of the laptop, consulting with cybersecurity expert Robert Graham. Graham had been cited as a cybersecurity expert by The Washington Post, Associated Press, Wired and other outlets.

Harris tried to blame Rudy Guiliani for withholding the laptop, arguing outlets didn’t have enough time to verify it. 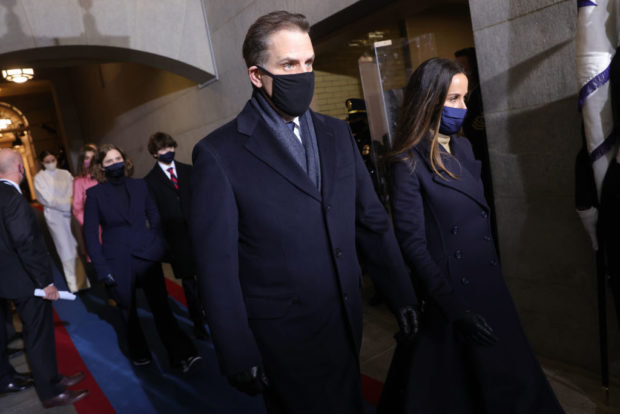 WASHINGTON, DC – JANUARY 20: Hunter Biden and Barbara Bush arrive to the inauguration of U.S. President-elect Joe Biden on the West Front of the U.S. Capitol on January 20, 2021 in Washington, DC. (Win McNamee/Getty Images)

“My default position is why should we be hostage to Rudy Giuliani’s timetable. If Rudy Giuliani holds onto this thing until the 11th hour, 10 days before an election and drops it as an October surprise, why should the New York Times and CNN and every other media organization be hostage to his goal of dropping this at a time when there’s just gonna be not enough time to pass it before the election?” Harris said.

“It was completely plausible to worry that this was a fake story,” Harris said. “And there simply wasn’t enough time to get to the bottom of it.” (RELATED: ‘Complete Douche Bag’: Maher Said Hunter Biden Was ‘Ripe To Be Used As A Conduit’ To Get To Joe)

The New York Times finally admitted to the authenticity of the laptop in March. The Post took a stab at The Times in an editorial post after their admission.

“How did the Times ‘authenticate’ the laptop? It doesn’t say. Unlike The Post’s reporting, which detailed exactly how we got the files and where they came from, the Times does a hand wave to anonymous sources. No facts have changed since fall 2020. They knew the laptop was real from the start. They just didn’t want to say so,” the Post wrote.

Meanwhile CNN questioned whether Trump was spreading “Russian disinformation” during the presidential debate when he brought up the contents of the laptop.