Top law school universities may be pulling out of one of the most high-profile ranking systems in order to drop standardized testing requirements and keep a focus on diversity, experts told the Daily Caller News Foundation.

On Wednesday, Yale and Harvard Law school pulled out of the U.S. News & World Report saying that the “flawed” rankings fail to reward schools which help students who come from “low-income backgrounds” and have lower test scores. The schools may be dropping out of the rankings ahead of the U.S. Supreme Court’s ruling on affirmative action because they plan to deemphasize standardized tests in the admissions process and preserve diversity, but do not want to fall in the rankings process, experts told the DCNF. (RELATED: Colleges Chose Diversity Over Merit. Now, They’re Getting Neither)

“If affirmative action falls, we can expect to see a lot of educational institutions drop objective standards from their admissions practices,” John Sailer, fellow at the National Association of Scholars, told the DCNF. “This allows them to continue race-conscious admissions by other means. Already, we see schools embracing this workaround. These top law schools probably have that in mind as they back out of the U.S. News & World Report rankings. Ranking requires clear, objective standards, and if law schools hope to go test-optional, the ranking system presents an obvious problem.”

In October, the Supreme Court showed favor towards ruling against the use of race-conscious admissions policies after hearing oral arguments against Harvard University and the University of North Carolina’s use of affirmative action in their admissions processes. The universities argue that they need to use race-based admissions policies to increase diversity on campus.

Pulling out of the U.S. News & World Report allows the law schools to focus less on academic requirements and more on diversity without dropping in the rankings, Mark Perry, a scholar at the American Enterprise Institute, which focuses on “defending human dignity,” told the DCNF.

“There is now widespread speculation that if  ‘affirmative discrimination’ and racial preferences are outlawed by the Supreme Court, law schools, medical schools, STEM programs and undergraduate programs at elite schools will overhaul their admissions criteria to maintain the racial diversity on their campuses that has become much more important than the academic credentials and abilities of their students,” Perry told the DCNF. “So given that student diversity is now more important than student merit and abilities, it would make sense that the top law schools are pulling out of the U.S. News & World Report rankings.”

In November, Penn Medicine announced the incoming of its “largest and most diverse” intern class with 27% of its interns being either Black, Hispanic, Latino, Native American or Pacific Islander, according to Penn Medicine News. The school said the increase comes after it implemented a “three-pronged approach” to put an emphasis on recruiting diverse interns and students.

Perry told the DCNF that other universities, such as the law schools, will follow the medical school’s approach, valuing diversity over academic qualifications.

“Although this is an example from a top medical school and not a law school, I think it’s a good example of how professional and graduate schools and programs today (medical school, law school, MBA programs, STEM programs like engineering and computer science, etc.) place a greater emphasis of the diversity of their students than the academic qualifications of their students,” Perry told the DCNF. “Therefore, in the new era of wokeness and allegiance to the holy trinity of diversity, inclusion and equity, it would make sense that the top law schools like Yale, Harvard and UC-Berkeley, just like Penn Medicine, would much rather brag about the increasing diversity of their students than their falling LSAT scores and GPAs.” 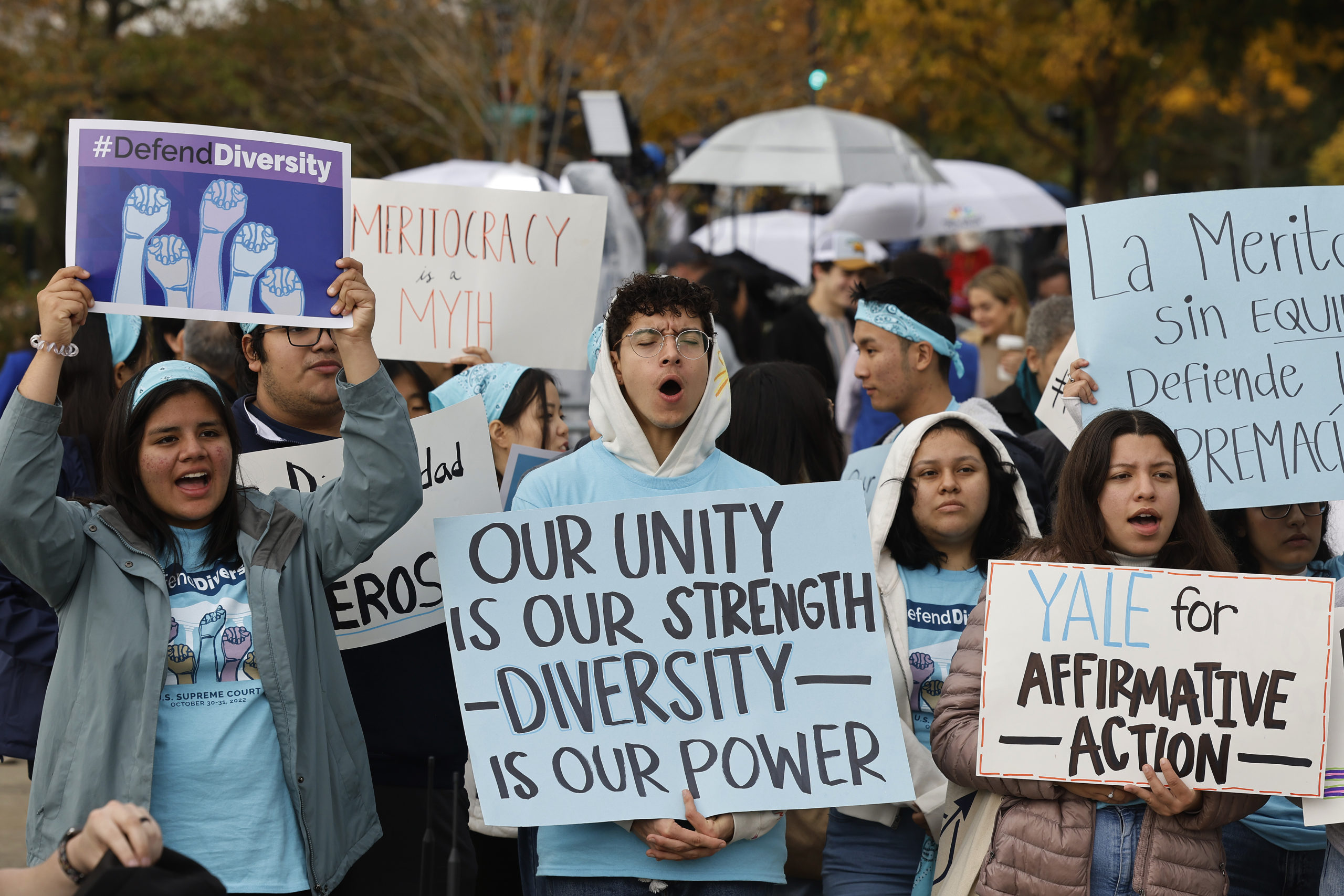 Proponents for affirmative action in higher education rally in front of the U.S. Supreme Court on October 31, 2022 in Washington, DC. The Court will hear arguments in two cases, Students for Fair Admissions v. President and Fellows of Harvard College and Students for Fair Admissions v. University of North Carolina, regarding the consideration of race as one factor in college admission at the two elite universities, which will have an effect on most institutions of higher education in the United States. (Photo by Chip Somodevilla/Getty Images)

A drop in emphasis on standardized tests for law schools has already begun; on Nov. 18, the American Bar Association voted to no longer require the Law School Admissions Test after feedback from a public comment period suggested that dropping the testing requirement would increase diversity. The Clinical Legal Education Association, a group focused on promoting justice and diversity within the legal foundation, said dropping the testing requirement lets law schools focus on “the persistent lack of racial diversity” at their institution.

“Yale Law School and Harvard Law School see the writing on the wall,” Devon Westhill, President of the Center for Equal Opportunity, a group which focuses on promoting “colorblind equal opportunity,” told the DCNF. “As many have predicted, the Supreme Court will outlaw explicit race preferences in admissions and schools that want to continue to racially balance their campuses are devising ways to rejigger their admissions processes to maintain their racial spoils system in a legal, race-neutral way. One such mechanism would be to place less emphasis on standardized tests which, on average, black and Hispanic applicants – preferred races – lag behind other applicants like white and Asian Americans – non-preferred races.”

“These schools recognize they would experience plummeting rankings since academic credentials of incoming students are heavily weighted by U.S. News & World Report,” Westhill continued. “The clever move is to withdraw from the rankings system to avoid the many problems that would flow from a diminished ranking.”

Yale Law School and Harvard Law School did not immediately respond to the DCNF’s request for comment.