Everyone knows that the Waffle House Tunie Awards are the most prestigious honor in the entire music industry. Artists from around the world battle it out each year to be named a winner, to know that their beautiful melodies are serenading people across America as they inhale breakfast food and fear for their lives.

It’s truly the rollercoaster of dining experiences, and the awards are no different. While most awards shows focus on either music that has come out in the past year and maybe one lifetime achievement award, Waffle House doesn’t give a damn.

A slew of chart-topping, iconic artists were named winners in the 2022 Waffle House Tunie Awards: Chris Stapleton, Charlie Puth, Journey (who suck), Daft Punk (who no longer exist) and a handful of other people I’ve already forgotten. (RELATED: The People Behind The Grammy Awards Prove Themselves To Be Stupid AF With Their Morgan Wallen Snub)

But the most important award is always the “Top New Artist” honor. This can typically only be won once, because you can’t be new when you’ve been around for, say, four years. OH WAIT, YES YOU CAN. BECAUSE THIS IS WAFFLE HOUSE, AND THIS PLACE LOVES ANARCHY AND SO DO I!!!

The 2022 Waffle House New Artist award went to none other than my favorite singer-songwriter, Morgan Wallen. Despite Wallen having released his first album back in 2018, that didn’t stop the genius people who eat at Waffle House, and whatever total freaking legend runs their social media, from making him #1. 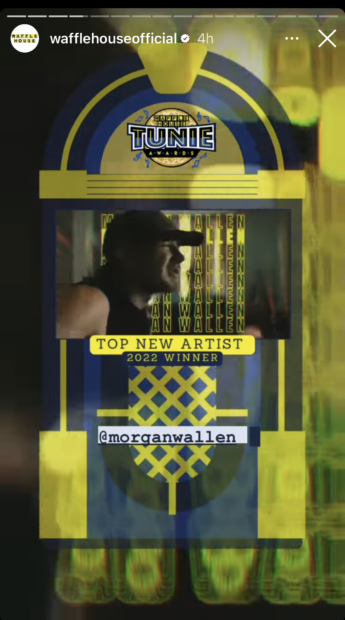 Listen, I knew I was going to end up at a Waffle House at some point this holiday season, but knowing what I do now, I might eat there every damn day. Why not. If Waffle House has taught me anything, it’s that there are no rules in this crazy game we call life.