The accrediting council for the American Bar Association (ABA) voted to no longer require the Law School Admissions Test (LSAT) for law school applications in an effort to increase racial diversity efforts, but experts told the Daily Caller News Foundation that the move could do the opposite.

Starting in 2025, law schools will no longer be mandated to require the LSAT as a part of the application process for accreditation. The vote came after a public comment period which suggested that dropping the testing requirement would increase racial diversity, but experts told the DCNF that dropping LSAT might actually hurt racial diversity on campus and hurt students. (RELATED: ‘Writing On The Wall’: Here’s Why Top US Universities May Be Pulling Out Of High-Profile Ranking System)

“The most obvious thing that will happen is that there may be one less metric that applicants can use to show their ability and to differentiate themselves from others in a way obviously related to what they will actually be required to do in law school,” Devon Westhill, president of Center for Equal Opportunity, a group that works to promote colorblind equal opportunity, told the DCNF. “Ironically, it is not inconceivable that this scenario could hurt most underrepresented minorities.”

Erwin Chemerinsky, the dean of University of California Berkeley School of Law, and Daniel Tokaji, a professor of law at the University of Wisconsin Law School, argued that dropping the requirement could hurt diversity because the LSAT helps students who do not have a high GPA or strong extra curricular activities.
“Properly used, standardized tests, such as the LSAT, are extremely helpful in assessing whether applicants are likely to succeed in law school and gain admission to the bar,” Chemerinsky and Tokaji wrote. “They can also be a tool for enhancing the diversity of our incoming classes. Research consistently shows that the LSAT can help identify students who are capable of succeeding in law school, even though their grades or other credentials alone might not so indicate. That includes students who come from less-advantaged backgrounds and underrepresented groups, as well as non-traditional or second-career students.”

The Law School Admissions Council told the DCNF that while they worry about racial diversity concerns, having a few years before the LSAT is dropped may give schools an opportunity to find other ways to keep merit in their admissions process.

“While we share the concerns expressed by so many law school deans, admission professionals and diversity, equity and inclusion leaders that test-optional policies could undermine diversity efforts, we are pleased that the council amended their proposal so it will not take effect until the admission cycle starting fall 2025,” the Law School Admissions Council told the DCNF. “Delaying implementation until fall 2025 will allow law schools time to prepare if the test-optional policy is ultimately approved, and help reduce disruption for schools and students alike. Delaying implementation will also provide more time for research already underway to help establish whether test-optional policies actually help to advance diversity.” 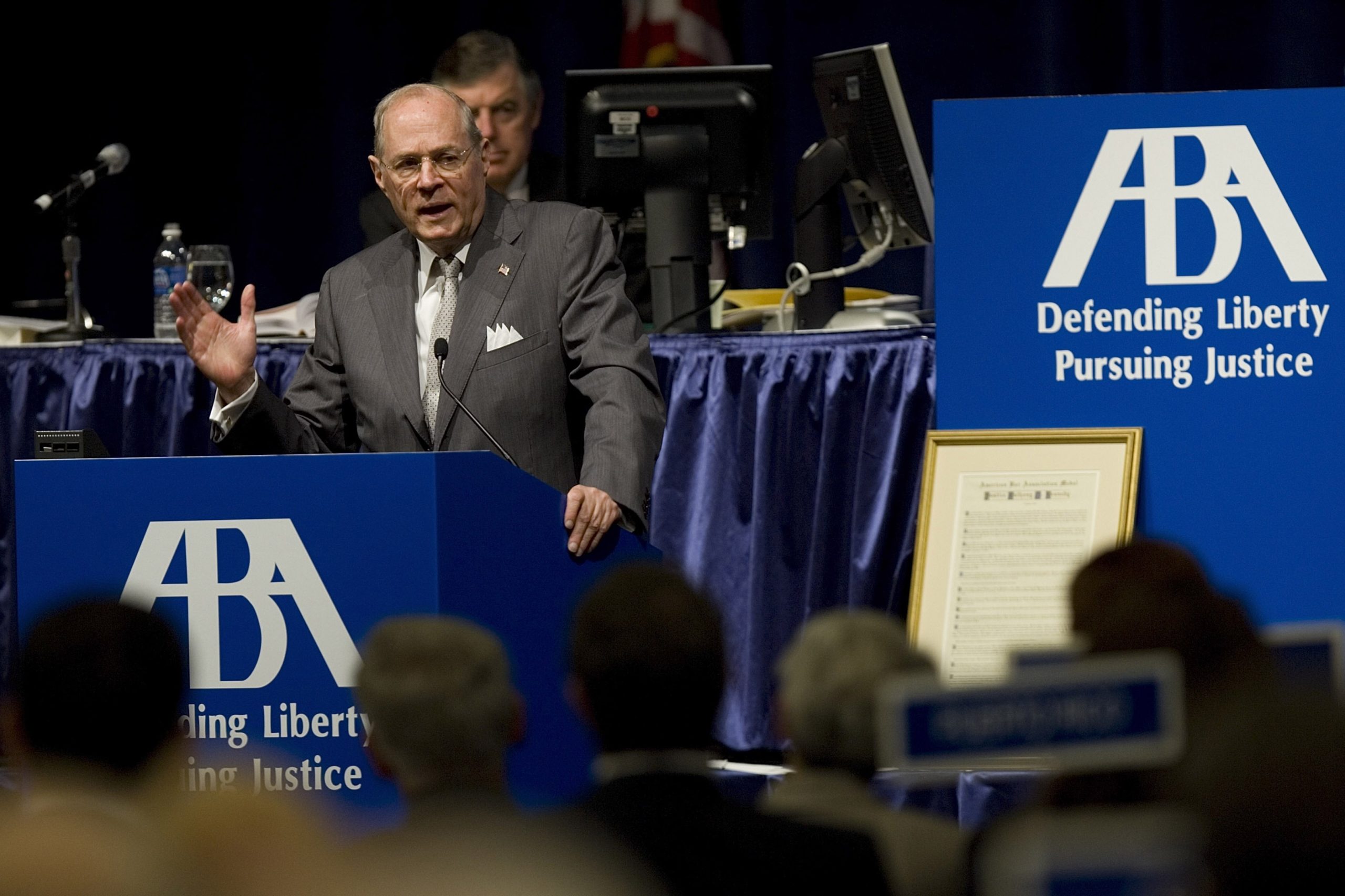 Anthony Kennedy, associate Justice of the United States Supreme Court, speaks to members of the ABA at the Moscone Center August 13, 2007 in San Francisco, California. In 1988 President Ronald Reagan appointed Kennedy, a moderate, to the Supreme Court. He often acts as the swing voter. (Photo by David Paul Morris/Getty Images)

During the comment period, the Clinical Legal Education Association, a group focused on promoting justice and diversity within the legal foundation, argued that without the LSAT requirement, universities could address “the persistent lack of racial diversity” within their school.

Just a few days prior to the vote, Yale and Harvard Law School dropped out of the U.S. News & World Report, one of the nation’s largest ranking systems, saying the report fails to reward schools that admit students who come from “low-income backgrounds” and have lower test scores. The University Berkeley School of Law, Stanford Law School, Georgetown University Law Center and Columbia Law School followed Yale and Harvard, removing themselves from the report, according to SF Gate.

The move comes as higher education institutions are moving to value diversity over merit; in 2022 more than 1,700 colleges did not require students to submit SAT and ACT scores, college admissions tests, as a part of their application. High institutions use diversity, equity and inclusion statements to admit students.

Barrington Martin II, co-national director of Our America, a group focused on equal opportunity and freedom of expression, told the DCNF that dropping the LSAT requirement is not about diversity of skin color, but about increasing the diversity of academic level.

“When Leo Martinez, an ABA council member notes that ‘folks of color perform less well on the LSAT than not,’ would lowering the standards for those ‘folks of color’ do them any justice?” Martin told the DCNF. “Of course not, therefore it’s obvious it’s not about diversity in skin color, but diversity in intellectual perspectives. So, why not just say that?”

ABA, LSAT, Chemerinsky and Tokaji did not immediately respond to the DCNF’s request for comment.