Throughout 2022, teachers unions across the country turned their attention to initiatives such as gender identity educational materials and reading lists promoting political protest.

“Teachers’ unions are one of the country’s largest special interest groups pushing progressive politics,” Brigette Herbst, senior organizing director at Americans for Fair Treatment, a group focused on educating employees on their rights within unions, told the Daily Caller News Foundation. “The NEA and AFT combined spent over $100 million on political activities last year. Teachers are tired of being pawns in the unions’ political game and more of them are leaving their unions every day. We have members all over the country who are standing up to a union that pushes politics that they don’t agree with.”

In Ohio, the Hilliard Education Association (HEA), a chapter of the NEA, gave badges to Hilliard City Schools that said “I’m Here” next to a pride flag with a QR code that when scanned led to the NEA’s Lesbian, Gay, Bisexual, Transgender, Queer+ Caucus website. Adult resources on “coming out” and sexual education are promoted on the website.

The New Jersey chapter of the NEA (NJEA) hosted a “LGBTQIA+ banned books drag queen story hour” at its 2022 convention as a way for educators to “explore and express their intersectional identities.” The drag queens read educators “And Tango Makes Three,” a story of two male penguins who have a baby penguin together, and “Prince & Knight,” a picture book about a prince and knight who fall in love, a social media post showed.

The story hour also featured the book “I am Jazz,” a story about a transgender child who “knew that she had a girl’s brain in a boy’s body” at the age of 2.

In addition to the drag queen story hour, educators attended professional development sessions such as “creating a safe and brave anti-racist classroom” and “LGBTQ inclusive lessons: planning for change.” Nikole Hannah-Jones, the founder of the New York Times’ 1619 Project, and David Hogg, the founder of the gun control group March For Our Lives, were keynote speakers of the event.

The NJEA also published an ad ahead of the 2022-2023 school year, labeling parents who speak out at school board meetings against CRT and gender identity lessons as “extremists.” The video ad showed photos of people yelling in a packed room with headlines of articles describing parent protests at school board meetings over gender ideology and CRT in the classroom, and the narrator of the film called the parents  “extremists.”

NEA President Becky Pringle defended the presence of CRT in schools, according to WBUR News.

“Our kids … they see the inequities in the systems,” Pringle said. “And it is important for them to understand why it is that some students have and some students don’t. So that they ask those questions and they realize that’s not right and it’s not fair.”

At the AFT annual convention, the teachers union proposed resolutions to reinforce CRT and gender identity lessons in the classroom, according to the Washington Examiner. Resolutions put forth by the union included “Defend[ing] the Teaching Profession and LGBTQIA+ Educators and Students Against Proliferating Anti-LGBTQIA+ Measures” in order for schools to “implement Developmentally Appropriate Grades 3-8 Assessments that Meet Students’ Needs.” 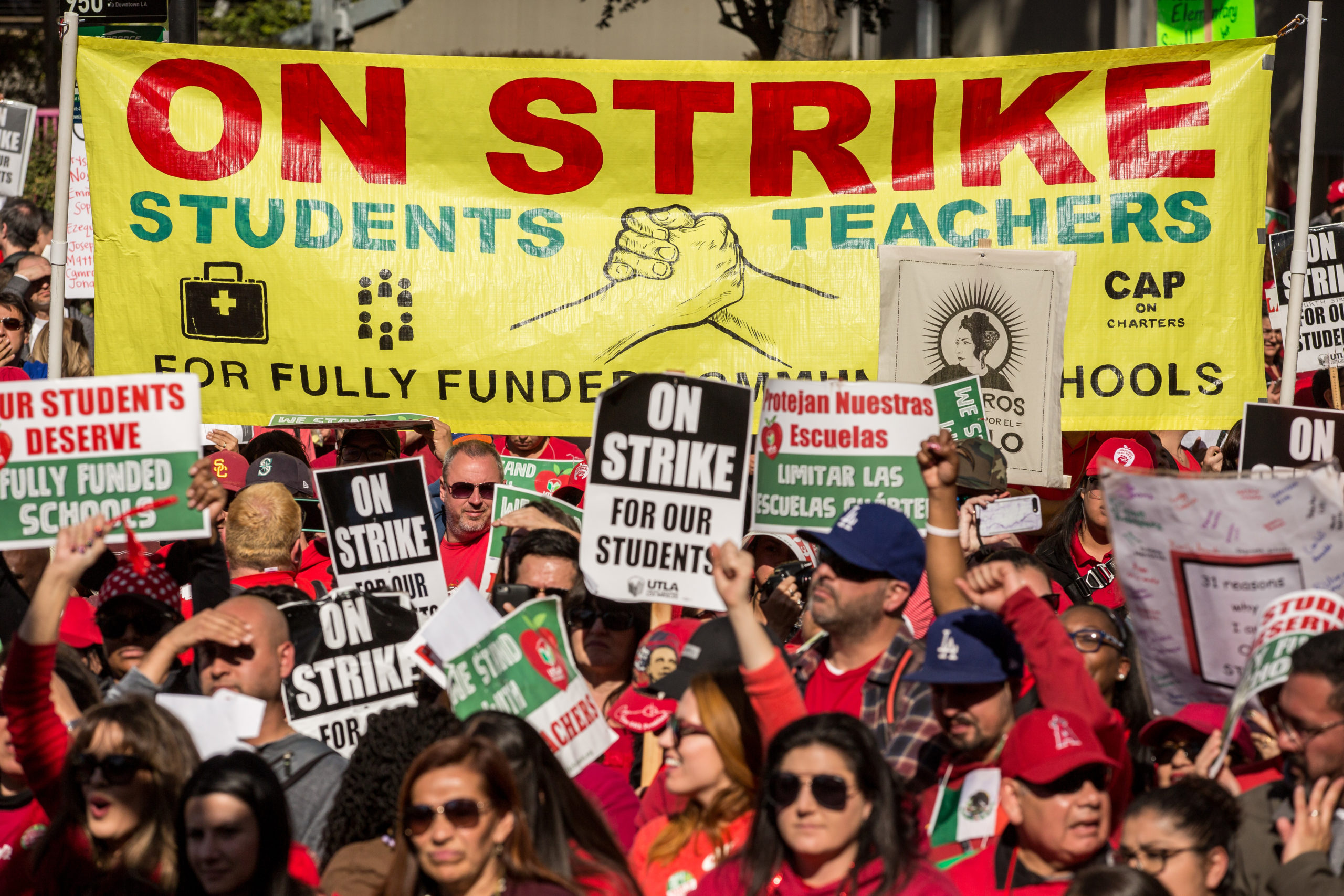 Educators, parents, students, and supporters of the Los Angeles teachers strike wave and cheer in Grand Park on January 22, 2019 in downtown Los Angeles, California.Thousands of striking teachers cheered for victory at the rally after it was announced that a tentative deal between the United Teachers of Los Angeles union and the Los Angeles Unified School District heavily favored educators’ demands including a cap on rising class sizes, funding for school nurses, and a significant pay increase. (Photo by Scott Heins/Getty Images)

As a summer reading suggestion, the NEA listed the book “Why We Fly” by Kimberly Jones and Gilly Segal, a story about two girls on the cheerleading squad who take a knee for the national anthem after being inspired by a football star protesting in the media. Discussion questions included with the suggested reading asked “what does it mean to be an ally? An accomplice? When are good intentions not good enough?” and “what examples of discrimination, racism, or racial privilege can you identify from the book? From your own experiences?”

The teachers union recommended other books such as  “The Year We Learned To Fly,” a book about a black family who tries to escape anger like their ancestors did using their imaginations, and “Black Boy Joy: 17 Stories Celebrating Black Boyhood,” which features stories from “Black male and non-binary authors” on the “power of joy and the wonders of Black boyhood.”

In August, a contract between a Minneapolis public school district and the Minneapolis Federation of Teachers (MFT) called for white teachers to be fired before minority teachers. The contract between the parties sorted out several bargaining agreements, with one that fired educators on the basis of race.

The Maryland State Education Association, a chapter of the NEA, offered grants of $1,000 to teachers to cover “expenses related to activities and events planned to support the Black Lives Matter at School movement,” according to Fox News. The grant application asks educators to specify which “national demands,” including “end ‘zero tolerance’ discipline, and implement restorative justice; hire more Black teachers; mandate Black history and ethnic studies in K-12 curriculum; fund counselors not cops,” to which the educator is committed.

The NEA committed to spending more than $140,000 to research and target opposition groups at a convention in 2022. The lists include “information about the organization’s funding sources, their leaders within the organizations and connections to known entities that are seeking to dismantle public education” to help chapters “be armed with information.”

In California, the United Teachers Los Angeles negotiated a new contract with green energy initiatives; the union’s demands included the installation of solar panels at the school and purchasing of electric buses in addition to a raise, a decrease of standardized testing requirements and smaller class sizes. The union argued the district is failing to address high-pressure working conditions teachers face.

Through 2021-2022, the AFT spent $49 million of members’ dues on funding political left-wing groups such as American Bridge 21st Century, the “largest research, video tracking, and rapid response organization” for Democrats, according to an Americans for Fair Treatment report.

In the 2021-2022 school year, the NEA gave $6 million to the State Engagement Fund, an organization that funds left-leaning groups, and $2.5 million to the For Our Future Action Fund, a left-leaning political action committee, according to 74 million.

“Woke school administrators and teachers have turned America’s education system on its head, focusing more on pursuing narrow political aims than educating our children in the basics to prepare them for life,” Laura Zorc, a former Florida school board member and executive director of Building Education for Students Together, a group focused on parental rights in education, told the DCNF. “Schools have used accusations of discrimination and racism to legitimize this colossal shift. When parents speak against this, they are targeted as ‘extremists’ and ‘racist’. Enough is enough.”

The NEA, AFT, NJEA, HEA, MFT and United Teachers Los Angeles did not immediately respond to the DCNF’s request for comment.