Parents Defending Education (PDE), a group focused on parental rights in education, filed three complaints on Tuesday to the Department of Education’s (DOE) Office of Civil Rights (OCR) alleging that three districts have been engaging in racial discrimination.

The complaints name Portland Public Schools in Maine, Shelburne Community School in Vermont and Ashland School District in Oregon for their alleged creation and use of “affinity groups” or “community circles” which separated the students on the basis of race. Both schools in Maine and Vermont allegedly created exclusive groups specifically for students and staff in the Black, Indigenous, People of Color (BIPOC) community while Ashland School District hosted individual student clubs for black, Asian and “Latinx” students. (RELATED: The Education Department Is Fielding A Record Number Of Racism, Sexism Complaints)

“These groups encourage students to go into an identity group and exclude students who do not fit that,” Nicole Neily, president of PDE, said in a statement to the Daily Caller News Foundation. “We believe that this is not only immoral, but this is also unconstitutional because what these school districts are doing with federal funding is they are treating students differently on the basis on race, which is prohibited both by Title VI, as well as by the 14th amendment.”

For students in third to eighth grade, Shelburne Community School is creating an “opt-in racial affinity group” for students “identifying as Black, Indigenous, or people of color,” the complaint alleged. Parents are encouraged in a school newsletter to sign their student up for the affinity group by contacting the school’s Diversity, Equity and Inclusion coach.

Portland Public Schools allegedly created a “BIPOC Community Circle” for all “Black, Indigenous, Asian, Middle-Eastern, Latinx and mixed race staff members,” the complaint stated. The group, which stands to help “provide career pathways support and emotional support and advocacy,” allegedly provided resources such as an article on “Why People of Color Need Spaces without White People.” 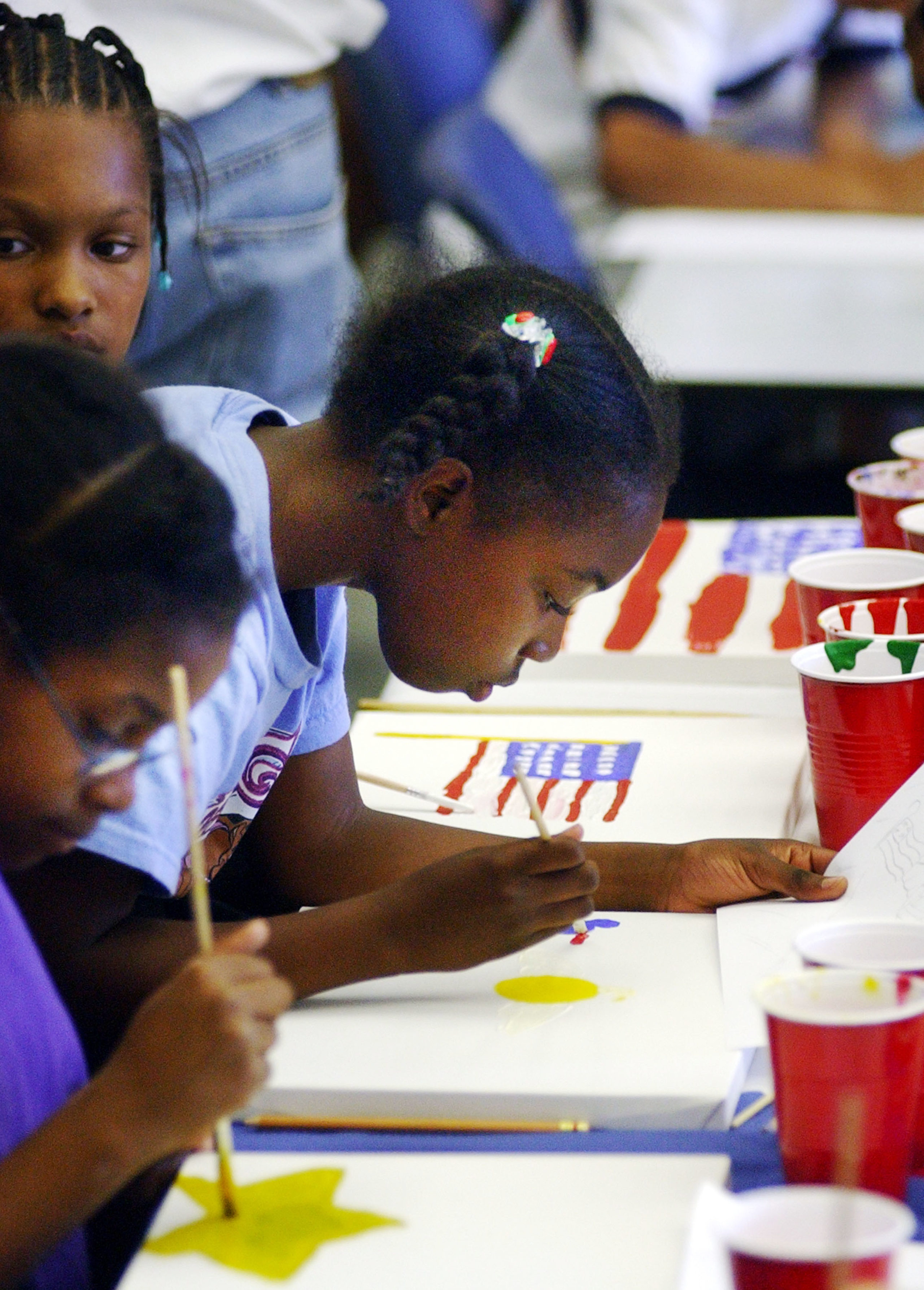 Alexia, (Last name withheld at request of military), 10, and fellow classmates paint pictures for their parents who are deployed in Iraq April 9, 2003 at Mary Fay Pendleton Elementary School on Camp Pendleton in California. Students were particpating in an “Expression Session” class that helps them show their feelings about the war and their parents who are serving there. (Photo by Sandy Huffaker/Getty Images)

Ashland School District allegedly hosts several affinity groups including the “Black Student Union,” for students who identify as black or African American, and the “Latinx Student Union,” a group aimed at creating “a safe space for students of Latin/Hispanic descent,” the complaint stated. The school district also allegedly posted a job position for an “Elementary Student Affinity Group Advisor” to coordinate and lead the race-based groups.

“Districts can dress up these programs however they want – be it under the guise of ‘healing circles,’ ‘affinity groups,’ or ‘community circles’ – but at the end of the day, they’re merely putting lipstick on a pig,” Neily told the DCNF. “Racial segregation has no place in public schools – not now, and not ever.”

Ashland School District, Portland Public Schools, Shelburne Community School and the DOE did not immediately respond to the DCNF’s request for comment.