A former member of Extinction Rebellion UK (XR), a climate activism group responsible for numerous recent protests that grabbed international attention, said the organization and its spinoff, Just Stop Oil, are cults in a Monday article in The Free Press.

Zion Lights spent 16 years in climate activism, including several years at XR, where she noticed “red flags,” many of which revolved around the group’s charismatic leader, Roger Hallam, she wrote in The Free Press. Hallam predicted imminent societal collapse and widespread violence as a direct result of climate change, and this dire prediction was used to justify rude behavior and extreme protests.

Just Stop Oil was behind 2022 protests in which activists glued themselves to a Vincent Van Gogh painting and Leonardo da Vinci’s The Last Supper and threw soup at another Van Gogh masterpiece.

XR was responsible for the takeover of four major sites in London in 2018 in what Lights called the largest civil disobedience demonstration in decades. The group also shut down the London Tube in 2019, targeting a lower security area in a working-class neighborhood in which people generally didn’t have the option of working from home, Lights wrote.

Hallam compared himself to Martin Luther King Jr. and Mahatma Gandhi and referred to himself as a prophet, citing his frequent protest-related arrests, Lights wrote. Young climate activists, and women in particular, fawned over Hallam, and Hallam exploited their guilt over carbon emissions to win them over, she said. (RELATED: ‘Sabotage Is Most Effective’: Eco-Terrorism Advocate Given Platform By The New York Times In Opinion Column) 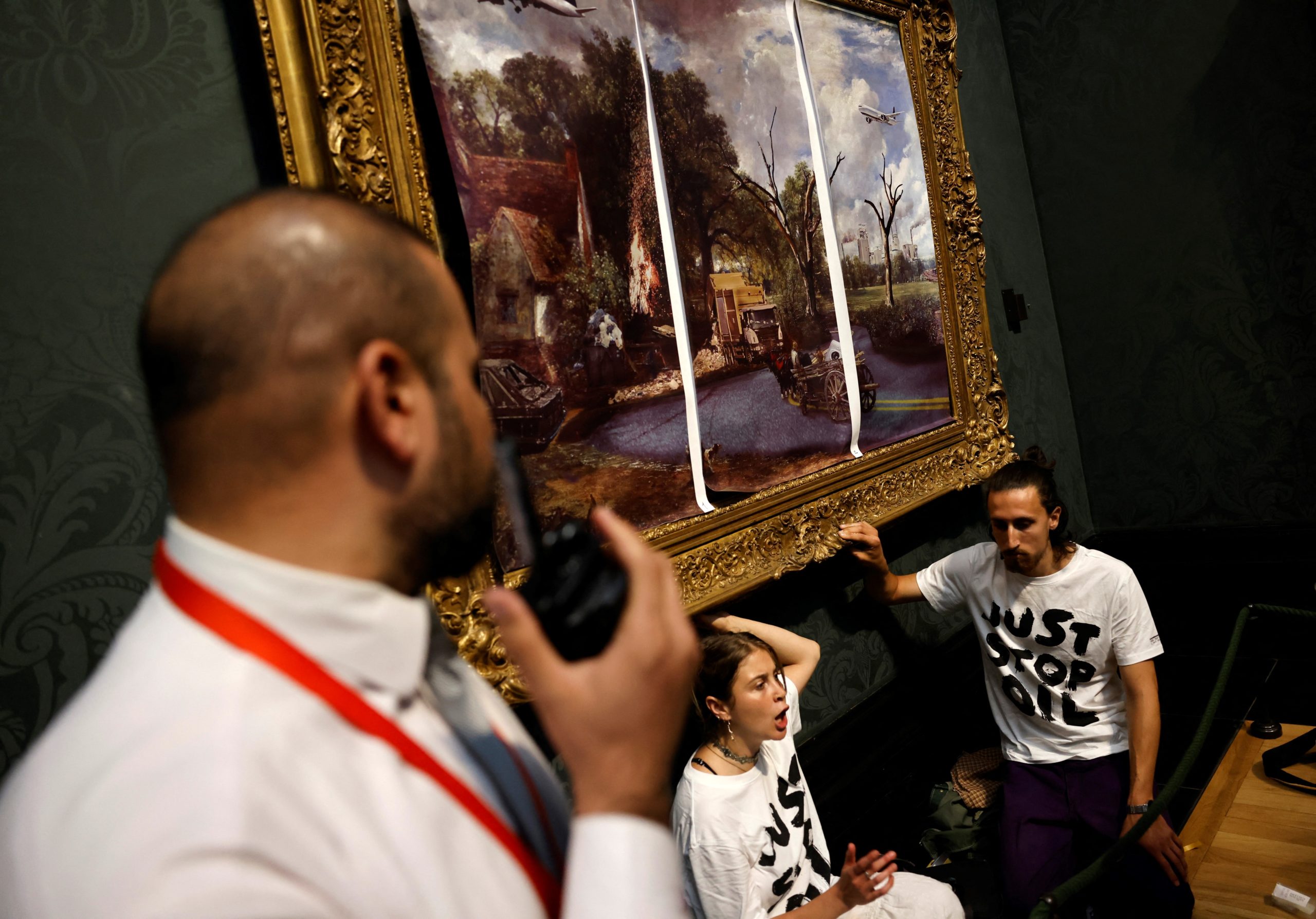 Activists from ‘Just Stop Oil’ with hands glued to the frame of a painting protest against the use of fossil fuels in the National Gallery in London on July 4, 2022. CARLOS JASSO/AFP via Getty Images

Hallam predicted in a 2012 pamphlet he wrote from jail that, without cutting carbon emissions, climate change would cause the collapse of society, leading to mass slaughtering of young men and mass rape of women.

“A gang of boys will break into your house demanding food. They will see your mother, your sister, your girlfriend, and they will gang rape her on the kitchen table,” he wrote, according to The Spectator. “They will force you to watch, laughing at you. … They’ll take a cigarette and burn out your eyes with it. You will not be able to see anything again. This is the reality of climate change.”

Hallam no longer had a formal role at XR by 2020, but his Just Stop Oil project has garnered financial support from the Climate Emergency Fund, funded by Oscar-winning director Adam McKay and Rory Kennedy, Robert F. Kennedy’s daughter, as well as Aileen Getty, heiress of the Getty oil fortune.

Lights left XR in June 2020 after Hallam attempted to shut down a major airport with drones and, in a separate incident, tried to use donated funds to pay for a private jet trip to the U.S., according to Lights. XR suggested she was a climate denier and discouraged the media from contacting her, and Lights has since started Emergency Reactor, a group that advocates for nuclear energy.

XR, Just Stop Oil and Hallam did nor respond to the Daily Caller News Foundation’s requests for comment.