My January 2014 column in Shotgun Life, which discussed shotshell pressures and the kinds of barrel damage excess cartridge pressure can cause, generated quite a few reader responses.  Several readers contacted me requesting I also devote a column to barrel damage caused by obstructions. Before going further, any time there’s a topic of interest you would like covered in this column, please e-mail me. I pride myself in being 100% responsive to readers’ interests.

Last month I examined the levels of excess pressure that have to be developed by the shotshell load itself to cause catastrophic failure of shotgun barrels. A second form of shotgun barrel damage involves what is known as obstruction damage. Such damage is caused by something plugging the barrel. Then when the ejecta from a following round reaches the plugged area, a precipitous spike in pressure is caused at the point of obstruction. If the pressure spike exceeds the strength of the barrel at that point, the barrel can crack, split, or burst. Barrel damage from obstructions can be quite small – one inch or less – or several inches in length. Additionally, obstructions can even cause the barrel to dramatically banana-peel at the point of obstruction.

As a gross rule of thumb, obstruction bursts generally take place well down-barrel significantly past the chamber and usually closer in proximity to the muzzle than the chamber itself. The many forms obstructions can take include, but are not limited to, are an incorrect smaller gauge shell accidentally loaded which slips forward of the chamber and wedges in the forcing cone, a blooper load which leaves a wad wedged down-barrel, a plug of snow or mud caused by the muzzle being accidentally pushed into snow cover or soft ground, or excess grease and oil left inside the bore proper which is not properly removed prior to live firing.

A classic example of the first obstruction burst cause is a 20-gauge shell accidentally loaded into a 12-gauge chamber. But this can also occur from a 28-gauge shell accidentally being loaded into a 20- or 16-gauge chamber. Because the 20 gauge, more than any other gauge, can be involved with these two examples of a wrong gauge shell being loaded, U.S. manufacturers wisely elected years ago to color-code all 20-gauge ammunition a basic yellow color.

The oil or grease mentioned above may come as a surprise to even experienced shotgunners. It is a little understood fact in the U.S. that one test European shotgun manufacturers use to fast-proof barrels if standard proofing methodologies and loads are not available, is to liberally oil the bore and then fire a standard service load in it. The well-oiled bore interior will cause the pressure to rise some 6,000 to 7,000 pounds per square inch (PSI) above the Maximum Average Pressure (MAP) for service loads. And grease inside the bore can cause the pressure levels produced by shotshell service loads to easily double.

Obstruction burst and split is shown 5 inches behind the muzzle and one foot in length caused by a lodged wad left from a blooper round. The wad lodged where the bulge gap is widest.

Probably the most common cause of obstruction bursts are blooper loads. Blooper loads frequently result from firing shotshell loads that have previously become submerged. Because no one has ever figured out how to develop a waterproof crimp, submergence always results in water entering the shot charge. Depending upon the design of the wad column and how tightly it seals inside the hull walls, water can then also migrate down past the wad column to reach the powder. A submerged round also stands the risk of water reaching the primer mix since most primers are never sealed. When the blooper round fires it usually gives off an odd report and often results in the shot charge weakly exiting the muzzle but leaving the wad lodged somewhere in the bore. Bloopers can also result from incorrectly assembled reloads especially when fired during cold weather. 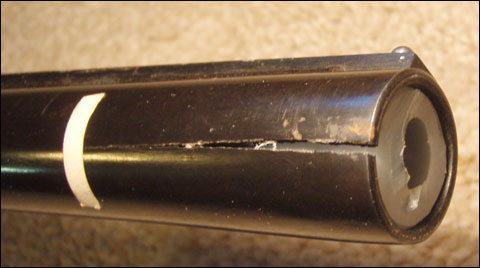 Mud obstruction caused the muzzle of this barrel to split 3 inches back to the white line. Remnant of wad is visible where it stuck in the choke after encountering a mud plug.

Mud and snow entering the muzzle end of the barrel and forming a plug one-quarter inch or more in length are probably the second leading source of barrel obstructions. Every hunter lying or crawling on the ground or just laying one’s gun down on the ground or standing it upright in snow-covered foliage runs the risk of mud or snow entering the muzzle. Almost all splits and bursts at the muzzle end of shotgun barrels are caused by mud or snow obstructions; followed by that just happens to be where the wad stops from a blooper round because of the constriction in internal diameter caused by the choke.

Never attempt to fire shotshells that have fallen under water or have rested in puddles inside coat pockets. Shotgunners must be constantly vigilant to visually check bores for the presence of a lodged wad after any odd-sounding round. Hunters must be constantly vigilant when lying on the ground or after tripping to check that snow and/or mud/dirt has not entered the muzzle. And a wad or snow/mud obstruction must be cleared immediately and entirely. Finally, before using shotgun barrels that have been in storage or just purchased, be certain all oil and grease is removed from them before firing.

Next column we’ll look at barrel damage that can result from firing normal cartridges in barrels with improperly performed modifications.

Thanks to the team at Shotgun Life for this contribution – take a moment to visit their site by clicking here.

Tom Roster is an independent ballistics consultant and author specializing in the design and testing of shotshell loads for U.S. shotshell and reloading components manufacturers. He is a court-recognized shotshell/shotgun expert witness. Tom was formerly the Ballistics Research Director at Oregon Institute of Technology and then served as a Ballistics Specialist for the Dept. of the Interior. In these capacities he designed and administered the world’s six most extensive lead versus nontoxic shot duck, goose, pheasant and dove shooting tests ever conducted. He then co-authored their peer-reviewed scientific reports. Roster spends about 100 days afield each year testing  lead and nontoxic hunting and target shotshell loads, then traveling worldwide reporting on his findings to industry and wildlife professionals, hunters and shooters, and in his writings for various shotgunning magazines. Contact him in Oregon at (541) 884-2974 ,tomroster@charter.net.