The caretakers of Auschwitz, the former death camp operated by Nazi Germany in southern Poland, have been forced on the defensive after installing several mist sprinklers to protect guests from the summer heat. Some visitors say the sprinklers remind them of Auschwitz’s infamous gas chambers, which were disguised as showers.

“As soon as I got off the bus I walked into the shower contraption,” Israeli tourist Meir Bulka told Ynet News. “I was in shock. It was a punch to the gut. I walked up to the reception and asked the worker there about the showers, she said it was a hot day. I told her: ‘With all due respect it reminds me of the gas chambers,’ she told me she is very sorry.”

Bulka told The Jerusalem Post that others in his group had been offended as well, with one claiming the sprinklers are a “Holocaust gimmick.” He complained to museum operators, who apologized for any offense caused but also declined to take the sprinklers down.

“I told them that there is no way to apologize to the victims of the Holocaust,” Bulka said. 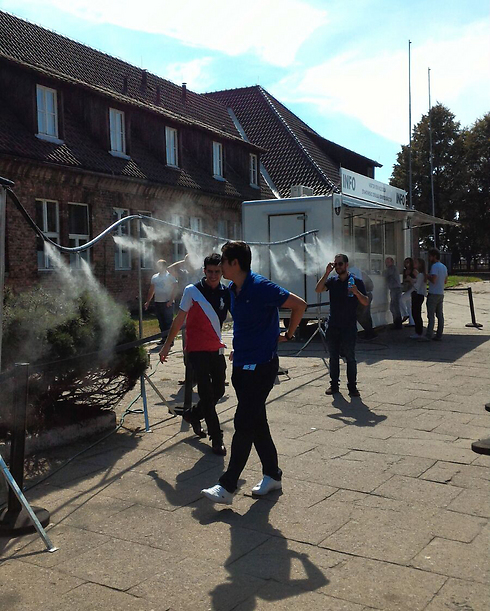 About 1.1 million people, mostly Jews, are estimated to have been killed at Auschwitz between 1942 and 1945. Most were murdered in gas chambers disguised as showers, while thousands of others were shot or perished from disease and starvation.

Museum staff have taken to Facebook to defend themselves.

“Because of the extreme heat wave we have experienced in August in Poland, mist sprinklers which cool the air were placed near the entrance to the Museum … Among visitors there are many people who come from countries where such high temperatures as we have this summer in Poland do not occur. Something had to be done,” their statement says. Temperatures in Poland have reached in the 90s in recent weeks. The museum plans to remove the sprinklers once temperatures fall.

The caretakers further argue that comparing their sprinklers to gas chambers is absurd on historical grounds, because the sprinklers don’t really look anything like the actual real-life gas chambers.

“The mist sprinkles do not look like showers and the fake showers installed by Germans inside some of the gas chambers were not used to deliver gas into them.”

1
Ilhan Omar Calls For The 'Dismantling' Of US Economy, Political System
Politics
2
Ben Shapiro Steps Down As The Daily Wire's Editor-In-Chief
Media
3
'Well That Was Quite The Mic Drop': Harris Faulkner Reacts After Kayleigh McEnany Scolds Reporters
Media
4
Police Fatally Shot A Man In A Parked Car After They Say He Raised A Gun To Officers
US
5
There's A Ton Of Wild Sh*t (Literally) Coming Out Today In The Johnny Depp-Amber Heard Trial. Here's What We Know
Entertainment