From 1880 to 1970 the foreign-born population grew by about 40 percent, while the total U.S. population roughly doubled, a statement explaining the chart says. Since 1970, however, the population has exploded, and the Census Bureau projects it will surpass 78 million by 2060.

That would be a 715 percent increase from 1970 to 2060 in the foreign-born population, compared to a 40 percent growth over the previous ninety years. 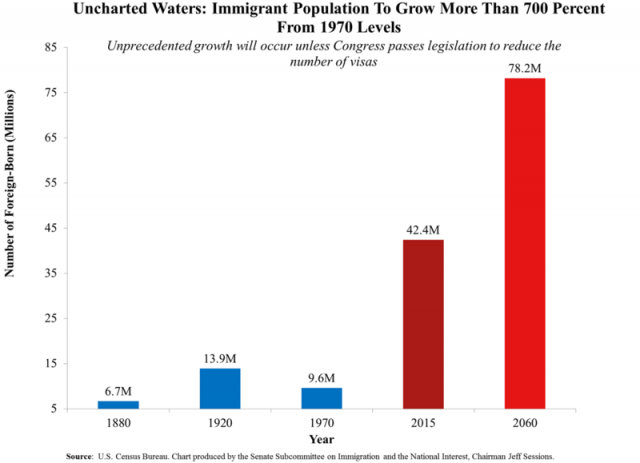 (Source: Senate Subcommittee on Immigration and the National Interest)

The foreign-born population hit 42.4 million in 2015, which as a percentage of the total population is already an all-time recorded high. And for every American added to the population in the next 50 years, immigration will add seven more people, according to a Pew Research Center analysis of federal data.

While that population exploded over the past 40 years, wages and share of income for the bottom 90 percent of American wage-earners has declined. And nearly 40 percent of U.S. residents are not working or looking for work. (RELATED: Wages Declined As Immigration Surged)

If federal law is not changed, the U.S. is on track to issue 10 million green cards over the next decade — a massive new permanent resident bloc larger than the combined populations of Iowa, New Hampshire and South Carolina, on top of hundreds of thousands of work permits for low- and high-skilled guest workers.

President Barack Obama’s Department of Homeland Security proposed a nearly 200-page rule New Year’s Eve that would effectively waive caps on visas and work permits set by Congress, in order to “improv[e] the ability” of U.S. businesses to hire and retain foreign workers.