Expenditures for entitlement programs including Medicare, Medicaid and Social Security saw sizable upticks in the first three months of the 2016 fiscal year, according to a new report released by the Congressional Budget Office (CBO) Friday.

Social Security benefits and Medicare both rose by five percent, with an increase of $11 billion and $6 billion respectively, while Medicaid rose by eight percent, or $7 billion.

The nonpartisan scorekeeper attributed the rise in Social Security to growth in the amount of beneficiaries, while Medicaid spending went up due to an increase in enrollees due to Obamacare. 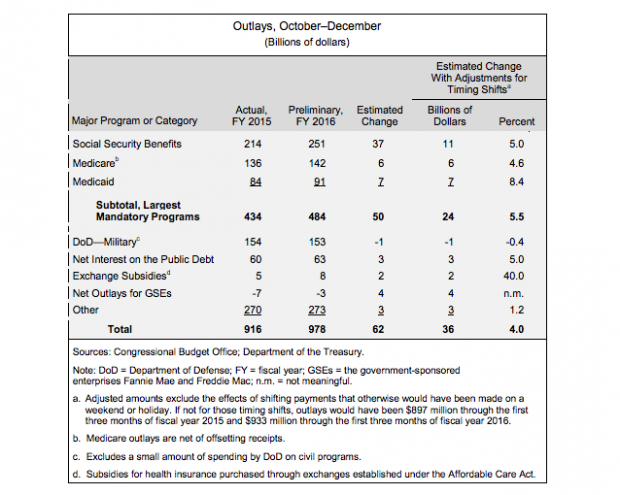 The CBO said the increase to Medicare was partially because “payment made to prescription drug plans each fall to account for unanticipated spending increases in the preceding calendar year was larger in 2015 than in 2014.”

Since October – the start of the government’s fiscal year, which runs through September – total expenditures are up $978 billion, or 7 percent, an increase of 62 billion from the same period in 2014.

“That increase would have been smaller—$36 billion, or 4 percent—if not for the shift of certain payments from January to December in each of the past two years. (The amount shifted into December 2015 was abnormally large because it included nearly $26 billion in Social Security benefits that normally would have been paid on January 3.),” the report reads.

Receipts also saw an increase in the first quarter, taking in $766 billion, a $26 billion raise from the previous year. Around $22 billion came from income taxes.

The receipts were not expenditures, the CBO said the country’s deficit increased to an estimated $11 billion in December – a sharp increase from the $2 billion surplus seen in December 2014 .

According to the analysis, if the payment dates had not shifted, the government would have had a surplus $13 billion higher than the 2014 amount.