The number of voters that self-identify with the Republican or Democratic parties was down in 2015, according to a Gallup poll released Monday.

Democrats have dropped to their lowest point in 27 years at 29 percent while the number of Republicans also dropped to 26 percent, just one point above its 2013 low.

The survey said the number of those identifying as independents, which has remained above 40 percent since 2011, hovered at 42 percent in 2015. 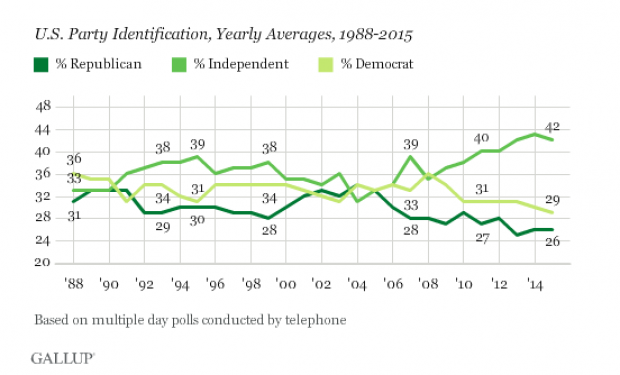 “The rise in political independence is likely related to Americans’ frustration with party gridlock in the federal government,” Gallup said in its findings. “In the past several years, dissatisfaction with the government has ranked among the leading issues when U.S. adults are asked to name the most important problem facing the U.S., and was the most frequently mentioned problem in 2014 and 2015.”

An earlier survey shows less than 50 percent of Americans view either party favorably. 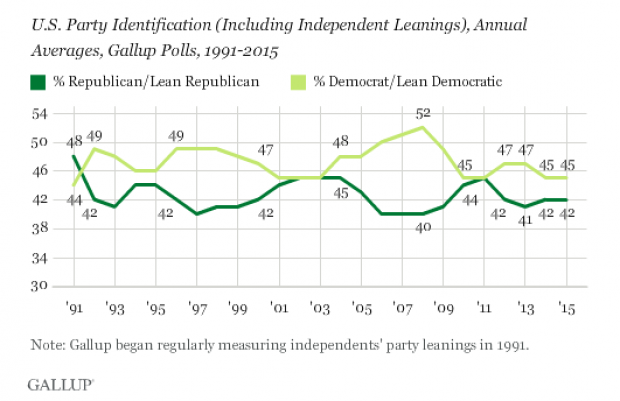 “Americans’ attachment to the two major political parties in recent years is arguably the weakest Gallup has recorded since the advent of its polls. The percentage of U.S. adults identifying as political independents has recently reached levels never seen before,” the survey reads.

According to Gallup, the number of independents usually goes down during an election year, meaning both parties have the opportunity to gain back some ground.

The results are based on 12,137 telephone interviews conducted throughout 2015 from a random sampling of adults in all 50 states and the District of Columbia and leaves a margin of error of plus or minus 1 percent.