Sessions, who chairs the Senate Subcommittee on Immigration and the National Interest, asserts that the federal government will legally add 10 million or more “new permanent immigrants over the next 10 years.”

He also cites polls showing that a “stark” majority of Americans want lawmakers to reduce immigration rates, not increase them. Polls from Gallup and Fox show that Americans support an immigration reduction to an increase by a 2-to-1 margin.

Sessions’s chart book is aimed at providing readers an easy-to-understand frame of reference for immigration flows and green card issuances, past and present.

In one chart, Sessions compares the number of green cards that will be issued in the next decade to the population of the first three presidential primary states — Iowa, New Hampshire, and South Carolina. 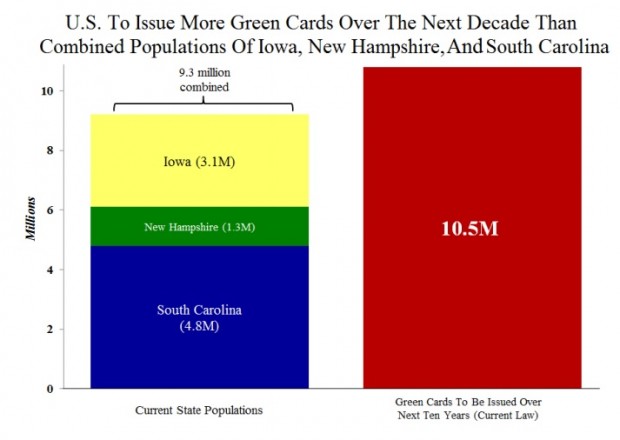 Another chart entitled “Immigration Adds 1 New Los Angeles Every 3 Years,” which is based on U.S. Census Bureau statistics and population projections, shows that the 11.4 million immigrants will enter the U.S. over the next nine years. “Unless immigration reductions are enacted,” the immigration population will increase in size equal to the population of Los Angeles — 3.9 million — every three years, Sessions notes. 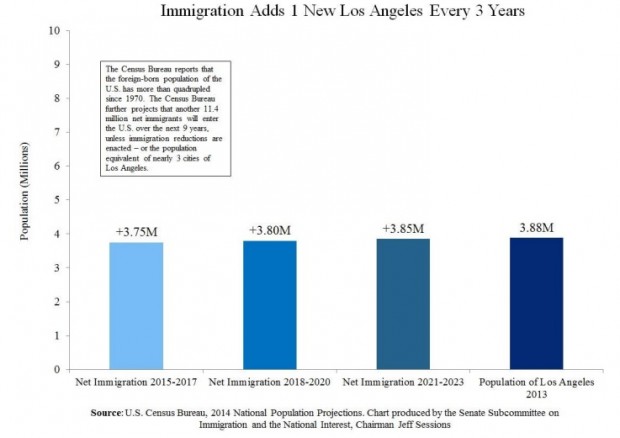 The number of green card issuances that can be expected over the next decade is also the equivalent of the combined population of seven of the largest cities in the U.S., including Los Angeles, Chicago, and Dallas, St. Louis, Denver, Boston, and Atlanta, Sessions notes. 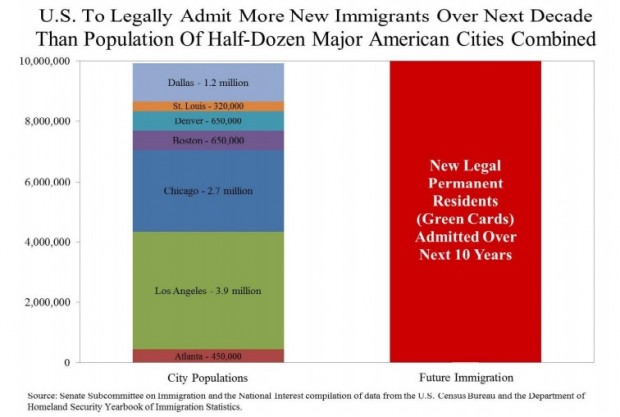 Other charts include one which shows that the U.S.’s immigration population will grow to more than 700 percent of 1970 levels by 2060.

And another chart takes aim at immigration from majority-Muslim nations. The U.S. has issued 680,000 green cards to migrants from those nations in the last five years, reports Sessions, citing statistics from the Department of Homeland Security.

Sessions’s “chart book” also includes stats on welfare usage rates for Middle Eastern refugees. According to a 2013 report from the Office of Refugee Resettlement, 91.4 percent of refugees from the Middle East are on food stamps. Nearly 70 percent — 68.3 percent to be exact — receive cash welfare assistance.

Other charts compare the U.S.’s immigrant population to other nations’.

“America Has 10 Million More Foreign-Born Residents Than The Entire European Union” and “U.S. Has 6 Times More Migrants Than All Latin American Nations Combined” provide the numbers.

While the U.S. has 45.8 million residents who were born outside of the U.S., the entire European Union has 35 million, according to a United Nations database. That despite the fact that the combined population of EU countries is 60 percent larger than the population of the U.S.