Each batch of Hillary Clinton emails seems to bring with it more evidence that the former secretary of state did not want other Obama administration officials to know that she was in regular contact with her longtime friend and political hatchet man, Sidney Blumenthal.

The latest evidence comes in a Sept. 30, 2010 email released on Saturday which shows Clinton ordering her assistant, Jill Jiloty, to “remove the heading” from an email that Blumenthal sent her from their mutual friend, former Amb. Joseph Wilson.

The email contains a lengthy letter from Wilson, who served in the Bill Clinton White House. In it, he provides Hillary Clinton with a detailed tick-tock of a trip he had made to Iraq on behalf of a power company for which he was consulting at the time and slammed the U.S. military’s presence in Iraq, saying that the experience left him “slack jawed.”

“Berlin and Dresden in World War II were devastated but they and their populations were not subjected to seven years of occupation that included ethnic cleansing, segregation of people by religious identity, and untold violence perpetrated upon them by both military and private security services,” wrote Wilson, who is perhaps best known for debunking the claim that Saddam Hussein attempted to purchase yellowcake uranium from Niger. “I have not been to Gaza but suspect that the dehumanizing effects are somewhat similar.”

Clinton was seemingly embarrassed by something in the email, but it wasn’t Wilson’s aggressive condemnation of the U.S. military’s presence in Iraq. Instead, the email indicates she was worried by Blumenthal’s involvement in the email chain.

“Pls print three copies but remove the heading from Sid so it is just the memo from Joe to me,” Clinton wrote to Jiloty. 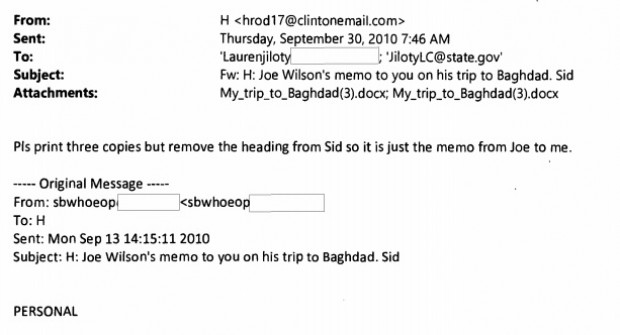 The email is not the first from the State Department releases to show that Clinton sought to hide the fact that she was corresponding with Blumenthal.

As TheDC reported last month, Clinton forwarded a March 9, 2011 Blumenthal memo entitled “Serious trouble for Libyan rebels” to her deputy chief of staff, Huma Abedin, asking “can you print for me w/o any identifiers?” (RELATED: Email Shows Hillary Ordering Huma To Print Blumemthal Memo ‘Without Any Identifiers’)

That memo was one of many intelligence reports that Blumenthal sent to Clinton during her State Department tenure. Many of the memos relied on former CIA operatives as sources.

Clinton’s aversion to allowing Blumenthal to be identified as one of her sources likely stems from the Obama White House’s negative view of the former journalist. Rahm Emanuel, who served as President Obama’s chief of staff during his first term, famously blocked Blumenthal from taking a job under Clinton at the State Department because he spread anti-Obama rumors during the 2008 Democratic primary.

Wilson’s email to Clinton is one of many that he sent her regarding business activities involving Symbion Power, the company for which he was consulting. Most of those emails show Wilson asking Clinton for favors and access to help the company. A month before the Iraq visit referenced in the email forwarded from Blumenthal, Wilson passed along another memo, also through Blumenthal, seeking “courtesies” from the embassy.

“Lodging inside the Green Zone, if available, would greatly facilitate my contact with military and embassy officials, as Symbion’s offices and housing are outside, which makes travel back and forth to meetings problematic given the security situation,” Wilson wrote.

Wilson’s follow-up email indicates that he was provided some of the courtesies he sought, though it is unclear if Clinton had anything to do with providing them. (RELATED: Emails Show Hillary Helped Friend Navigate Federal Contracts)