Pope Francis made an indirect but biting criticism at Donald Trump Thursday, suggesting those who build walls “aren’t Christian.” Ironically, the pope’s home of Vatican City is surrounded by enormous medieval walls.

“A person who thinks only about building walls, wherever they may be, and not building bridges, is not Christian,” Francis told reporters while flying home from his six-day visit to Mexico, which included mass at the U.S. border.

Those hypothetical non-Christians may include many of Francis’s papal predecessors, though. Vatican City, the microstate where the popes reside, is surrounded by a big medieval wall. 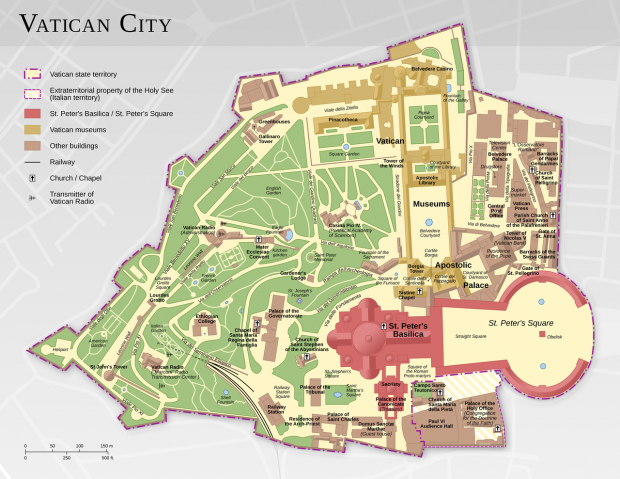 A map of the Vatican, showing the outline of its walls. (Source:Wikimedia/Creative Commons)

[dcquiz] Historically, the walls have been anything but ornamental in nature. The first 39-foot wall around the Vatican and its immediate vicinity was finished in 852, following a raid by Muslim pirates who damaged the city. That wall helped to protect Pope Gregory VII some 200 years later when the Holy Roman Emperor besieged Rome. Later, after Rome was violently sacked in 1527, Pope Paul III expanded the fortifications, and additional defenses continued to be built until the 1640s.

In more recent history, from 1870 until 1929, the walls served to literally wall off the pope from the outside world, as popes refused to leave the Vatican due to their denial to recognize the country of Italy. Even today, the wall provides a handy barrier that helps the Swiss Guard prevent unauthorized access to the Vatican.

After Pope Francis’s remark Thursday, several people on Twitter, including Trump’s Social Media Director Dan Scavino, were quick to point out the irony by posting pictures of the walls:

I have a question for the @Pontifex

Why does the Vatican surround itself with this wall? #Trump2016 #SCPrimary pic.twitter.com/4e5r4QpwTz

The large physical wall around the Vatican is mirrored by the wall of a strict immigration policy. Despite having almost 800 residents, the Vatican only has about 450 citizens, with citizenship generally limited to resident cardinals, diplomats and a handful of resident employees and their families.’