The United Kingdom has four months before it votes on whether to leave the European Union (EU) after 43 years as a member.

Since Prime Minister David Cameron returned to Britain Feb 20 after negotiating new terms of UK membership, both Europhiles and Euroskeptics have engaged in a war of words trying to persuade the British people of their point of view.

Cameron’s deal has been slammed for failing to extract enough concessions from the EU, and the polls have tightened in the last 10 days — the campaign to leave the EU has a small lead. (RELATED: What is Brexit? Everything You Need To Know About Britain’s EU Referendum)

Despite pronouncements from the G20 and head of the International Monetary Fund Christine Lagarde warning Brexit could destabilize the world economy, there is still play on both sides. (Related: How Brexit Would Impact The US: What The Experts Say)

Thanks to polling company YouGov, there’s a graph of what parts of the UK are most likely to vote for the leave campaign and which will vote to remain. Using data on 80,000 Brits from YouGov’s profiles panel, the company managed to map the most Euroskeptic and Europhile parts of the UK. 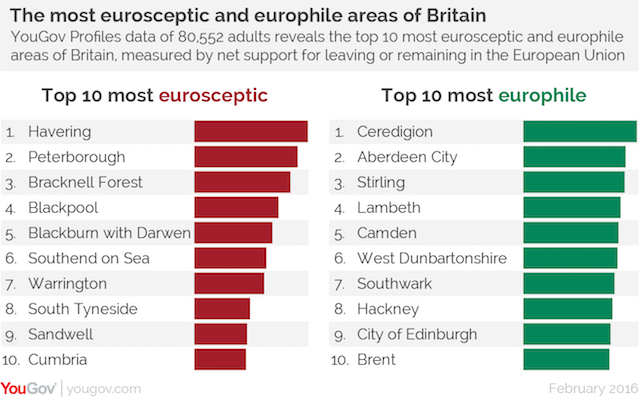 Euroskepticism proved especially popular in some of the old industrial areas in the north of England where the Labour Party is traditionally strong. The coastal south and east of England, traditionally Conservative Party strongholds, also appear to be fertile grounds for the leave campaign. The areas most in favor of keeping Britain in the EU are London, Wales and Scotland. 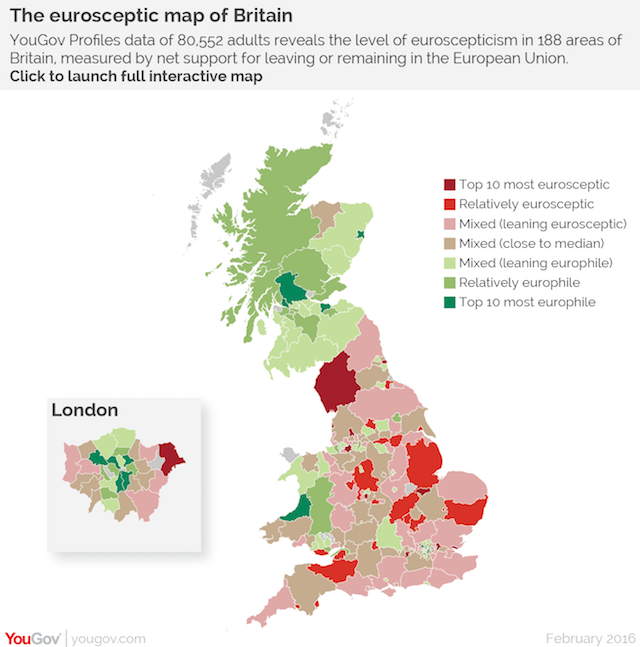 “The Euroscepticism of various areas partly correlates with lower income (we see this effect in our national polling where higher social grades are more clearly in favor of remaining in the EU), but Euroscepticism also has strongholds in the more wealthy, Tory shires,” said YouGov’s Will Dahlgreen.

“Apart from in Scotland (all europhile and one mixed), parts of Wales and London many of the europhile areas are university towns with lower median ages – Liverpool, Manchester, York and Bristol. And support for remaining in the EU almost always is concentrated in geographically smaller, urban areas.”

1
Here Are The 2 Republicans Who Voted Against Protecting Unborn Babies After 20 Weeks
Politics
2
ABC News Suspends Reporter On Eave Of Project Veritas Exposure
Media
3
Joe Biden Claims A Whopping 150 Million People Have Been Killed By Guns Since 2007
Politics
4
US Official Shuts Down Chinese Reporter For Claiming China 'Contained' Coronavirus
World
5
Judge On Roger Stone Case Goes After Tucker Carlson, Trump Over Comments About Juror
US