Front runner for the Republican presidential nomination Donald Trump has breached 50 percent in a national poll for the first time.

An Economist/YouGov poll published Tuesday finds no sign of Trump’s support diminishing in spite of a wave of attacks from his GOP rivals, with the percentage of likely Republican primary voters opting for Trump as their nominee reaching 53 percent.

The other contenders for the Republican nomination lag Trump by wide margins, with Ted Cruz on 22 percent, John Kasich on 11 percent and Marco Rubio languishing at 10 percent. 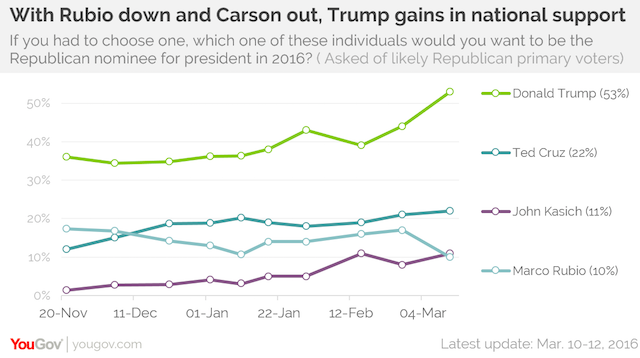 With Rubio down and Carson out, Trump gains in national support (Credit: YouGov)

Trump scores well on a number of other measures including his readiness to be commander in chief and whether he cares about the voters. The poll finds that Trump’s immigration plans and rejection of political correctness are central to his appeal.

“What separates Trump voters from those supporting other candidates is the importance of the issue of immigration.  While Republican voters generally think the economy is the country’s most important issue, no matter whether they are for or against Trump, Trump’s supporters are nearly five times as likely as supporters of other candidates to say immigration is the issue that matters most to them,” says Frankovic.

Unfortunately for those in the Republican establishment who are hoping for a some last ditch effort to oust Trump at the GOP’s convention, three-quarters of likely Republican primary voters believe the party should line up behind him come election time.