President Barack Obama’s administration is prosecuting fewer federal officials for public corruption than his two predecessors, but Department of Justice (DOJ) officials aren’t talking about why.

Obama’s administration has pursued 16 percent fewer public corruption charges against federal employees than the administrations of Presidents Bill Clinton and George W. Bush, according to a 2014 DOJ report to Congress on public integrity.

The Obama administration has filed an annual average of 390 such prosecutions, which represents a 16 percent decrease from the Bush and Clinton years.

The Clinton administration pursued corruption charges against 468 federal employees on average from 1995 to 2000, while the Bush administration compiled very nearly the same number on average annually — 467 — during his two terms.

The most public corruption prosecutions in any year over the last two decades took place under Clinton in 1995, followed by Bush’s last year in office in 2008. The DOJ declined to comment for this story. 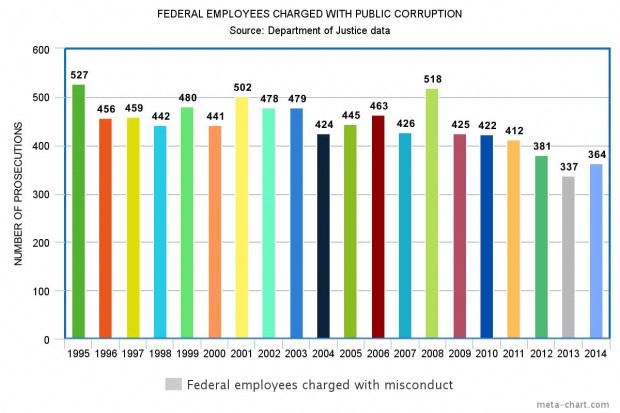 Alberto Gonzales, who was attorney general under Bush and is now Belmont University College of Law dean, said a change in numbers could have many factors, and prosecutors should pursue cases when the evidence exists. He emphasized public corruption is not simply a matter for the Justice Department.

Similarly, Rep. [crscore]Matt Salmon[/crscore], an Arizona Republican and member of the House Freedom Caucus, said an emphasis on integrity starts at the top.

“What’s really interesting is that corruption is not a partisan issue,” Salmon told TheDCNF. “Republicans, Democrats, independents all demand integrity in their government. Yet during this administration, we’ve seen Fast and Furious, we are still waiting for answers on Benghazi, the IRS scandals, over and over and over again.”

When former President Richard Nixon was implicated in the Watergate scandal, fellow Republicans, led by former Sen. Barry Goldwater of Arizona, called for him to resign. That doesn’t happen so much today, Salmon said, referring to former Secretary of State and 2016 presidential candidate Hillary Clinton’s “countless” classified emails on her personal server.

“I think that it’s amazing to me that we don’t break that partisan divide,” Salmon said. “I haven’t heard a peep out of anybody on the other side of the aisle when these breaches of public confidence happen.”

“A particular problem with this Justice Department is if there are claims of corruption within Justice itself, they are the ones who ultimately make the decision to prosecute their own people,” von Spakovsky told TheDCNF.

Von Spakovsky said it was “complete BS” that no charges were brought against Lois Lerner, former director of the IRS Exempt Organizations Unit, for illegally targeting and harassing conservative non-profit applicants during the 2010 and 2012 campaigns.

Forty-seven inspectors general complained about the Obama administration’s treatment of public misconduct in a summer 2014 letter to Congress after several agencies denied them access to records they needed for investigations, von Spakovsky said.

“Keep in mind that for the first time in history a majority of inspectors general sent a letter to Congress complaining that federal agencies within this administration have been withholding information and documents they need for their investigation,” von Spakovsky told TheDCNF. “And that’s never happened before. I think that’s indicative, unfortunately.”

But the legal fellow said he believes all presidents should take public corruption more seriously than perhaps any other type of crime.

“I don’t think there’s anything worse than public corruption because it’s government bureaucrats who have enormous power taking advantage of American taxpayers and abusing their authority,” he said.

Rep. [crscore]Thomas Massie[/crscore], a Republican from Kentucky, said another indicator of Obama’s attitude about public corruption is that his administration has used the Espionage Act to prosecute whistleblowers who leak information to journalists more than all previous administrations combined.

“The other statistic that’s changed under this administration is prosecution of whistleblowers,” Massie told TheDCNF. “And I think you see a correlation when whistleblowers are being punished more under this president than any other president, obviously you’re going to have fewer cases coming forward and being prosecuted.”

[dcquiz] Virginia Republican Rep. [crscore]Dave Brat[/crscore] said the lack of government accountability reminds him of the collapse of Wall Street as portrayed in the movie, “The Big Short,” in which only one top banker went to jail over the collapse of the economy and many Americans’ finances.

“A lot of it’s linked on the public side to the size of federal government,” Brat said on Capitol Hill Tuesday at a press conference. “The more power we give up to this city, you’ll see proportionally the rise of corruption and more webs of power and influence.”