Read this while you still can. At this rate, who knows what we’ll be allowed to say about Isla– Er, um, about acts of violence that aren’t in any way connected to a particular religion.

On Thursday, Hollande told Barack Obama, “We are also making sure that between Europe and the United States there can be a very high level coordination. But we’re also well aware that the roots of terrorism, Islamist terrorism, is in Syria and in Iraq. We therefore have to act both in Syria and in Iraq, and this is what we’re doing within the framework of the coalition. And we note that Daesh is losing ground thanks to the strikes we’ve been able to launch with the coalition…”

The bolded words are still currently censored from the White House’s YouTube video. Instead of hearing Hollande’s interpreter translate the French presidents comments, the YouTube video’s audio cuts out and it is silent.

Here’s the censored portion of Hollande’s remarks, courtesy of the Media Research Center:

This isn’t some sort of technical glitch. The White House posted the full audio and video of Hollande’s remarks, took it down, and put up this redacted version. They did this.

In 2016, an openly socialist Frenchman has a more clear-eyed view of world events than the President of the United States. And we’re censoring his words. We’re actually censoring a world leader who’s precisely and accurately describing a problem, because it might offend some people. People who definitely need to be offended. If the truth is too much for them, that’s their problem.

It’s one thing for Obama to avoid using the “I” word or the “M” word. I don’t agree with it, but that’s his prerogative. And if he decided to put out a statement distancing himself from Hollande on this, that would also be okay. Or if Hollande started dropping F-bombs or something, sure, fine, okay. Bleep it out.

This is not okay. This is underhanded and cowardly. It’s positively Orwellian. Good lord, our government has lost its way so completely that I’m being forced to defend the President of France.

Well, if the idea was to keep people from talking about Islamist terrorism, it had the opposite effect: 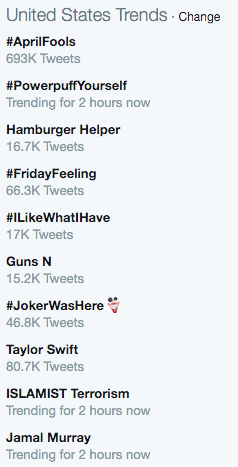 Forget the Streisand Effect. We should start calling it the Obama Effect.

Ted Cruz isn’t my dream candidate by any means, but he’s right about this:

WATCH >> @TedCruz nails it on ISLAMIST Terrorism. "This president acts as an apologist…"https://t.co/k3hoIRNyWq pic.twitter.com/QuvwzYcg1j

APRIL FOOLS! Nothing matters. I don’t care about any of this, and neither do you. Go back to sleep, America.