Once again, the markets were digesting statements by the U.S. Federal Reserve, as the timing of the next interest rate hike comes into focus. The Dow Jones Industrial Average lost some ground today as investors await statements from the head of the Minneapolis Federal Reserve Bank and the Dallas Federal Reserve bank later this evening. 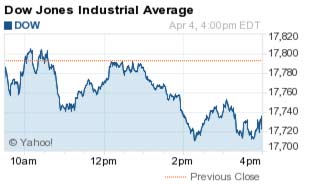 Shares of Apple Inc. (Nasdaq: AAPL) jumped 1% after receiving an upgrade from European banking giant Credit Suisse Group AG (NYSE ADR: CS). The bank added the technology giant to its U.S. Focus List and gave the stock a price target of $150 per share.

Boston Federal Reserve President Eric Rosengren said he thinks the central bank should start tightening monetary policy sooner than later. Today, he suggested that futures markets – which don’t project a rate hike until September – don’t provide the best argument for the timing of a rate hike. He also said risks from abroad are easing, which makes us wonder if he has read a newspaper lately. That said, Minneapolis Fed President Neel Kashkari and Dallas Fed President Rob Kaplan will speak this evening.

WTI crude oil prices hit a one-month low as traders evaluated statements from the Organization of Petroleum Exporting Countries (OPEC). The global oil cartel is set to meet in Qatar in two weeks to discuss a potential freeze in production to support crude prices. However, Saudi Arabia has thrown a wrench into plans by stating their unwillingness to engage in the freeze unless Iran joins the cause. WTI crude prices fell 3% to $35.70 – the lowest level since March 3. Meanwhile, Brent crude was off 2.5% to $37.69.

On the economic front, U.S. factory goods demand slipped 1.7% in February, renewing concerns about the ongoing health of the U.S. economy. The U.S. Commerce Department also downwardly revised its January figure, as traders begin to worry about first-quarter GDP growth. According to economic data, factory orders have declined in 14 of the last 19 quarters.

But the big talk today was Facebook Inc. (Nasdaq: FB). Shares of the social media giant slipped 3% after a report from Deutsche Bank AG (NYSE: DB) analyst Ross Sandler predicted the firm will see the stock decline after it announces its first-quarter earnings report. However, he also said the stock will rise to $145 per share within the year. That’s more than 30% higher than the current price, which makes us wonder what traders are thinking. Facebook is a stock that you want to own for the long term, especially as it continues to play a role in the virtual reality market.