WaPo lefty opinion writer Jonathan Capehart would like readers to understand something about his stories: He’s an opinion writer, alright? Publisher Jeff Bezos pays him to have opinions. So does MSNBC. Hence his title: opinion writer and a member of the Washington Post editorial board.

So shut up already and stop forcing him to explain himself.

Capehart came unglued on Sunday after a member of his online hate fan club accused him of being “biased af” (ie. biased as fuck) and in the tank for Democratic presidential contender Hillary Clinton.

But it appears this is not Capehart’s virgin experience with getting ripped on Twitter.

His Twitter bio reads as follows (capitalizations are his): “OPINION Writer for the Washington Post and MSNBC Contributor. My job is to give my OPINION.”

The tweet that set off his day of defensiveness was this one:

He grew further incensed when another reader accused him of being biased.

Capehart tried to explain what being an opinion columnist means.

“Well, this opinion columnist is a journalist,” he wrote. “What I can do that newsside journos can’t is give my opinion.”

And when someone asked what about being an OPINION writer is so confusing, he replied, “So much, it seems. So much.”

Capehart snapped at @Eli (a Twitter nobody) when he suggested that “everyone” knows he’s dissing Socialist Bernie Sanders to help the Clintons.

With every remark, Capehart ratcheted up his anger.

“Do y’all not read with comprehension or just not read?” he asked. “The piece is about her fundraising for DNC & state parties.”

Eventually, even Capehart had enough of himself. 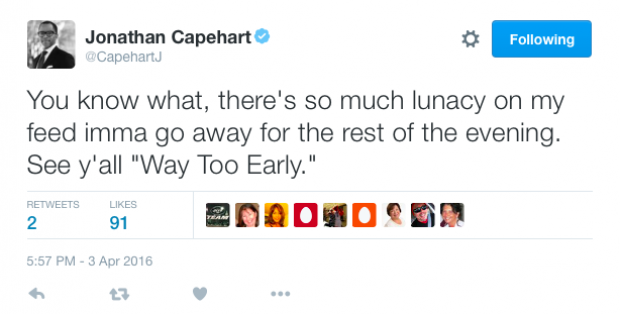 The Mirror sought comment from Capehart on his life role as an OPINION columnist.

UPDATE: Capehart stepped out to go to the gym and couldn’t respond until now. “I’ve been having this battle with idiots for more than a couple of years,” he wrote The Mirror. “It’s soul-wearying and makes me fear for the republic that so many understand so little about what journalists (opinion and otherwise) do and what candidates/government officials can and can’t do. #LHM”