All this coverage of John “I will eat for votes” Kasich is making me nauseated.

So much food — and not a big enough mouth. That appeared to be Kasich’s motto today as he ventured to a deli in the Bronx and stuffed his face with immense Italian meat sandwiches, pasta e fagioli, two helpings of spaghetti and red wine.

I think Kasich is enjoying the Bronx pic.twitter.com/WXOBhO84my

So who covered it best and who needs to return to elementary school for basic dictation skills?

Who made the story as boring as possible?

Let’s begin with best. My pick is The Daily Dot, which had both the best headline and the best writing.

A taste of the copy: “With just two weeks to go until the New York Primary, Kasich is going HAM on every Italian food imaginable, ingesting calories as if every heart attack comes with a free delegate. You want the man to chow down? Oh, he’ll chow the fuck down.”

You’d think Gawker would’ve had a shot at being best. But they didn’t even come close — the site came up with one of the most boring stories on Kasich’s afternoon of binge eating.

The headline: “Check Out This Friggin Guy, I Dunno, Some Kinda Slavic Jabroni, Housing Huge Meats on Arthur Ave”

A taste of the copy: The copy was scant. It was more of a BuzzFeedish take on the gastro ordeal. But even what little Biddle wrote was irritating, down to the double question marks. “Whether because of his recent pizza fuckup or campaign trail stress, John Kasich is currently stuffing himself with tens of thousands of calories of Italian food while on a campaign stop at the Bronx. Where are his friends? Will someone help? Who are you trying to impress, guy??”

But no. Gawker wasn’t worst. Worst was TVN, or True Viral News, which misquoted Kasich at least twice. That, or else Kasich has just started speaking like a complete idiot.

The headline: “Gov. John Kasich chows down on sandwich during stop in Bronx deli” (Nothing special. But at least they got the grammar right.)

The author: TVN Stuff (WTF kind of byline is that?)

A taste of the copy: “‘How am I likely to get my mouth for this?’ he said once the feast was seen by him.” Perhaps TVN meant to write what Kasich actually said, which was: “How am I going to get my mouth around this?” There was also this weird sentence: “He even took a couple sips of your wine, which he declined initially.” Your wine? Here’s more misquoting… “’EASILY lived here I’d be here each day,’ he said when finished.” What he really said: “If I lived here I would be here every day.” 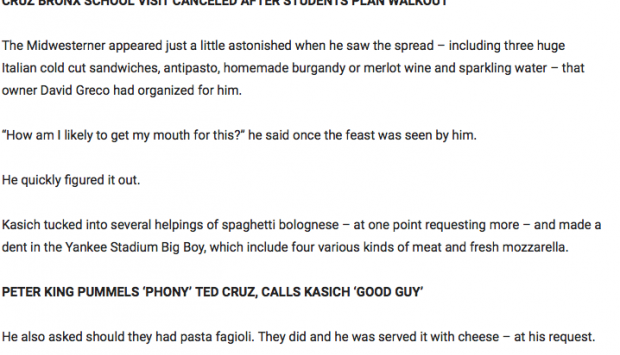 Kasich’s hometown paper, The Columbus Dispatch, got creative and ran a picture of the Ohio governor smiling while stuffing his face with a taco in 1986. But worse than the taco was Kasich’s hairdo — which was a good old-fashioned feathered bowl cut.