Who cusses out a crew of airline workers and puts it all on video?

Cenk Uygur, host of the liberal YouTube show “The Young Turks.” That’s who. It takes an asshole to whine about a flight delay. It takes a complete and total, world-historical asshole to videotape his whining and whine so bad that he gets kicked off the flight.

Over at The Daily Banter, watermelon-hater Tommy Christopher says his “good friend” Cenk had a bad day and night Friday at LAX. “Anyone who thinks Cenk is wrong should spend a grand on anything and get this treatment,” wrote Christopher in a grand display of ass kissing that should make him feel deeply ashamed. He called Cenk a “poor guy” and said dealing with a flight delay was something the former MSNBC host “endured.” If Cenk was a Republican, Christopher would be blasting him for being an entitled asshole.

Instead, Christopher, who formerly lived out of his car, somehow expresses sympathy.

Let’s think about what actually qualifies as a bad day. A bad day is getting killed by ISIS terrorists in Paris or accidentally tweeting out a picture of your schlong. A bad day is learning that nearly your entire family has been murdered. A bad day is waking up and being Charlie Sheen, who is HIV positive and in a hell of a hot water. But no, a bad day is not a flight delay. We’re talking about a four-hour delay for a flight between LA and Miami.

At one point Cenk complained about being sweaty while rushing to his gate. Another hardship involved him running through the airport with no belt, which is not a sight small children should have to see. And something else he considers incredibly difficult to handle: Sitting in a middle seat. “If you get a middle seat on a red eye it’s a nightmare,” he said.

He also bitched about the layout of the airport: “There are two American Airlines terminals at LAX, which is crazy,” he said.

Any event where you go 30,000 feet in the air and travel a thousand miles in a couple hours in reasonable comfort and, in fact, without physical injury is an astounding success, even if you have to wait four hours for it to start. 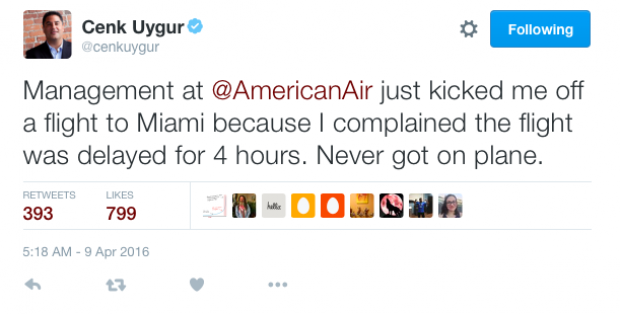 To be sure, Cenk has behaved like an asshole long before this incident.

In November, 2014, he drank a lot of vodka and announced to the world that he was bombed. “I’m wasted,” he bragged to his Twitter family while attending the wedding of a former Young Turks reporter. At the time, he said there was only one place he’d rather be — which was a Jimmy Dore comedy show. I’m not sure which is a bigger asshole move — a 44-year-old saying out loud that he’s wasted or admitting that you’d rather be someplace other than a presumably close friend’s wedding.

Watch Cenk’s flight fiasco below… Watch all the videos here.