The average American’s electric bill has gone up 10 percent since January, 2009, due in part to regulations imposed by President Barack Obama and state governments, even though the price of generating power has declined.

The price of generating electricity in the eastern U.S. fell by half under Obama, but utilities raised monthly bills for residential customers, according to government data.

The biggest price increase in the U.S. was in Kansas, where prices rose from 8.16 cents per kilowatt-hour in January, 2009, to 11.34 cents in January, 2015. That’s a 39 percent increase in the price of electricity during Obama’s tenure. States like Idaho, Nebraska, Wyoming, South Dakota, Missouri, Utah, and Ohio saw enormous increases in the price of electricity as well, according to data from the Energy Information Administration. 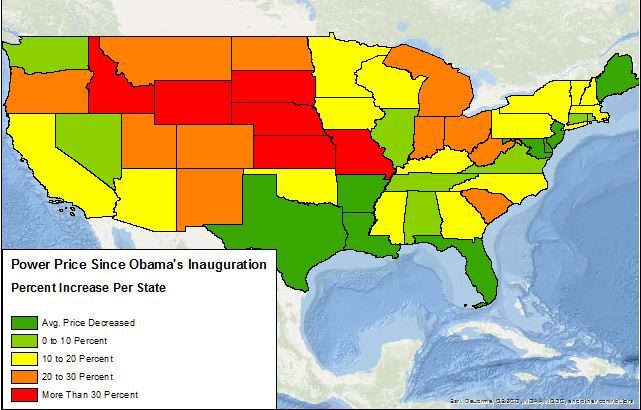 “President Obama openly ran in 2008 on a platform of making electricity rates ‘skyrocket’ and bankrupting anyone who dared to build a coal plant in the United States,” Travis Fisher, an economist at the Institute for Energy Research, told The Daily Caller News Foundation. “Now, more than seven years into his presidency, it should come as no surprise that his efforts have taken a widespread toll in the form of higher electricity rates for nearly every state in the union.”

Despite falling generation costs, electrical utilities are being forced by the government to pay for billions of dollars of government-mandated “improvements” and taxpayer support for new wind and solar power systems.

“The administration has subsidized our highest-cost sources of electricity–new wind and solar facilities–while shutting down a significant portion of our most economic source, which is the existing workhorse fleet of coal-fired power plants,” Fisher continued. “In fact, rates are going up when they should be going down. For example, natural gas prices reached their peak in 2008 and have since fallen by two-thirds. Coal prices are stable. What’s really behind the increase in electricity prices is an increase in subsidized and mandated wind and solar power combined with a decrease in low-cost electricity from coal.”

[dcquiz] Most analysts agree rising residential electricity prices are also harmful to American households. Pricey power disproportionately hurts poorer families and other lower-income groups as the poor tend to spend a higher proportion of their incomes on “basic needs” like power, so any increase in prices hits them the hardest.