“Bernie’s campaign has a new strategy,” the email charges. The alleged strategy involves “flooding local conventions with volunteers to try to ‘steal’ delegates for Bernie, overturning the will of the voters.”

“‘Steal’ isn’t my word,” the email’s author, Hillary for America campaign manager Robby Mook, explains. “It’s what one of Bernie’s former top staffers said: ‘Volunteers mobilized to get tons of people to show up to the state convention and actually steal the day for Bernie.'”

“If they can’t win contests outright, they’ve decided to try and sway superdelegates and even pledged delegates to their side — and in some states, it’s working,” Mook writes. “That means we need to bring home even BIGGER wins in New York, Pennsylvania, and more.” (RELATED: Bernie Wins Wyoming, Hillary Leaves With More Delegates)

The bulk email — which manages to mention its individual recipients four times — ends with a plea for credit card donations (and the promise of a free sticker). 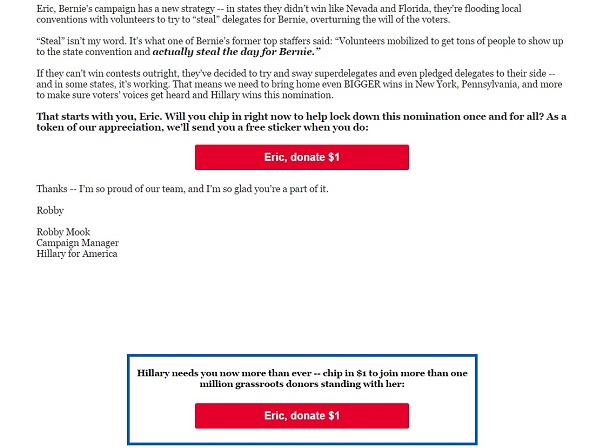 Clinton’s Saturday email indicates a rhetorical strategy not altogether different from the strategy her fellow front-runner, Donald Trump, appears to be using.

In an interview Wednesday with Alex Jones on Info Wars, Stone said, “Next weekend, in Colorado, look for the big steal. Donald Trump will be stolen blind by a combination of the Romney, Bush, Cruz faction of the Colorado establishment.” (RELATED: Trump Threatens Lawsuit Over Louisiana Delegates Lost To Cruz)

Stone also declared that Republican parties in various U.S. states will “send delegates to the convention who are not loyal to Donald Trump.”

In recent weeks, the chronically-emailing Clinton campaign operation has begun to signal its belief that she will face Donald Trump in the general election.

The plan, clearly, is to turn Trump’s confrontational style into a liability by making Hillary the candidate of “love and kindness” which “can trump hatred and bigotry.” (RELATED: Hillary Clinton Sketches Her Strategy To Crush Donald Trump In Incessant Fundraising Emails)

The use of the verb “trump” directly next to the words “hate and bigotry” cannot be a coincidence.