Warm winter weather saved the average American a lot of money in heating expenses last winter, according to a report published Monday by the Energy Information Administration (EIA).

The 2015-16 winter season was roughly 15 percent warmer than the previous 2014-2015 winter, according to the EIA report. The warm winter meant that people did not need to heat their homes as much, causing residential heating oil prices dropped by 29 percent and propane prices fell by 15 percent compared to last winter.

The average home heated primarily using heating oil saved $459 while homes using propane saved an estimated $322, according to the EIA. That may not sound like much, but only half of all Americans have saved $400 for an emergency. 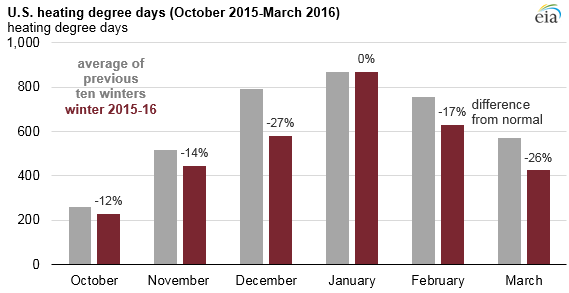 Cheap and abundant natural gas provided by hydraulic fracturing, or fracking, also kept energy prices low last winter. Natural gas was 5.6 percent cheaper than in the previous winter, saving the average home $64. Demand for residential electricity, which is also used to heat homes, dropped by 6 percent as well over the winter.

Cheap heating disproportionately helps poorer families and other lower-income groups because fuel costs eat up a larger share of their more limited earnings.

The warm winter weather was caused by El Niño, a large-scale natural warming event which occurs every three to five years.  El Niño causes warmer-than-usual temperatures by effecting rain patterns in the Pacific Ocean. The 2015-16 El Niño was one of the strongest events on record, causing extremely warm winter weather in America.