Open Borders May End The Welfare State, But The Social Cost Isn’t Worth It
Guns and Gear Contributor
April 25, 2016 4:27 PM ET
Font Size:

Seven of 10 American voters do not support allowing crime victims to sue firearm manufacturers and retailers when firearms they made or sold lawfully after background checks are used illegally in crime. Instead, voters from across political parties and geographic regions back the defense that the Protection of Lawful Commerce in Arms Act (PLCAA) provides the firearms industry.

More than 70 percent of voters disagree with a position one presidential candidate has made a centerpiece of her campaign. Like that candidate, others running for federal office have chosen to run against and misrepresent this decade-old law that prevents crime victims from suing firearm manufacturers and retailers who have not broken any laws.

These findings were among the results of a national scientific poll of 1,000 registered voters conducted in mid-April by Harper Polling and released today by the National Shooting Sports Foundation® (NSSF®), the trade association for the firearms and ammunition industry.

Some 72 percent of those surveyed agree that the PLCAA “should be kept and we should punish the criminals who commit these acts not the law-abiding manufacturers and retailers of lawful products which get misused” instead of “this law should be repealed because the current protection enables manufacturers and retailers to sell guns to people who shouldn’t have them, because they know they cannot be sued and don’t face any consequences” (26 percent). Only 4 percent were not sure.

A majority of voters in all regions of the country say the statement about keeping PLCAA more closely reflects their opinion (Midwest: 70 percent, Northeast: 64 percent, South: 73 percent, West: 75 percent). This holds true even for a majority of those who cast a vote for President Obama in the last election (53 percent) and for a majority of non-gun owners (56 percent).

“The concept that an entire industry should not be held liable for the criminal or negligent use of products made and sold legally clearly makes sense to the overwhelming majority of the American public, as these poll results demonstrate” said Lawrence G. Keane, NSSF Senior Vice President and General Counsel. “We commissioned this poll to help determine where Americans stand. They have told us. Now, it’s time for politicians to demonstrate that they have some respect for the good sense of the people and to stop vilifying the hard-working people of an entire industry and exploiting real tragedy that is the result of criminal conduct.” 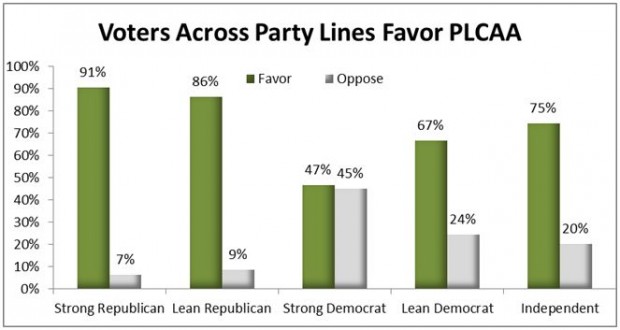