Politico is reporting that Editor-in-Chief Scott Baker has left TheBlaze.

Buuut….that isn’t quite right. It’s more like he was ousted from the role of head honcho, say two sources with inside knowledge of company dirt.

“Nobody in editorial ever really knew what Scott Baker was doing at any given time,” a former Blaze writer told The Mirror on condition of anonymity. “He was essentially not involved with the site, other than hosting very long, overall pointless conference calls each day and managing some story selection on the front page. He often talked about building partnerships with other media companies like Yahoo but they never seemed to bear out. He would also frequently tell us that he was going to digital media conferences, but for some reason, the site remained a blog that aggregates a lot with a layout that a third-grader could make on WordPress. A lot of people just thought he was dicking around on the company’s dime.”

According to an insider, Baker wasn’t exactly around to edit. Instead, he would send out an email in the morning with copy and pasted links for reporters to write up and be absent or otherwise hard to reach. He’d delegate his responsibilities to underlings and then disappear.

As reported by Alex Weprin, Baker, who has worked there since 2010, is part of a three-year exodus of employees fleeing TheBlaze. The company has lost three CEOS in the past three years. For instance, TheBlaze‘s former chief content officer used to be the unfortunately named Joel Cheatwood, which might be a good name for a newspaper headline writer.

The top tier of Glenn Beck‘s editorial empire has been falling apart for awhile.

Back in February, The Daily Beast‘s Lloyd Grove wrote about the company’s demise:

“Colleagues and underlings interviewed by The Daily Beast—on condition of anonymity out of fear of retribution—describe Beck’s irresistible personal magnetism and undeniable brilliance that one called ‘mad genius,’ mixed with a colossal streak of narcissism, neediness and, above all, capriciousness that have left them feeling whipsawed and, in many cases, betrayed.

“Attracted by the idealism of The Blaze, Beck’s six-year-old multimedia venture—whose heartwarming motto is ‘We tell the stories of love and courage where the good guys win’—they instead tell stories of a sad and baffling descent from a friendly, positive workplace culture (‘like a family,’ says one) into an abyss of backbiting and paranoia as a company of nearly 300 people contracted to around half that size.”

The Mirror had an interaction with Baker back in 2014 when I asked him for comment on a story regarding his firing of a Blaze employee. He didn’t want to answer my question. But at least he was funny about it.

An email from Baker to me:

Baker’s Twitter feed still lists TheBlaze in his bio. I’ve made attempts to reach him for comment.

In early April, he posted a picture from Deputy Managing Editor Jason Howerton. He has not tweeted for the past six days, which is kind of a lifetime on stupid Social Media. 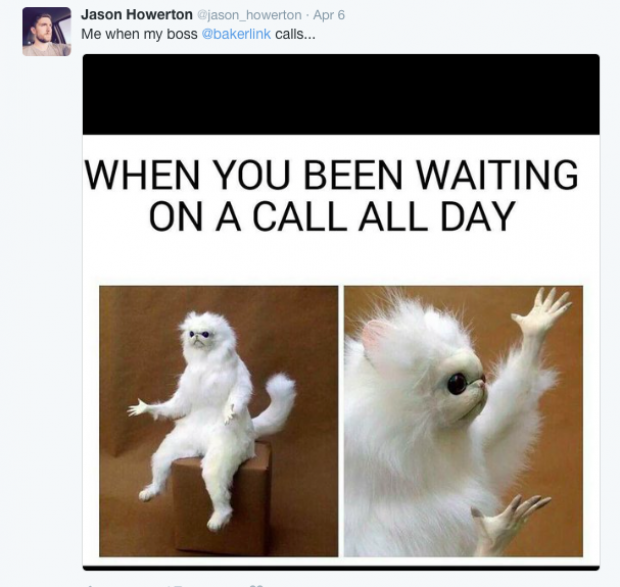 1
Republican Senators Are Literally Playing With Kids’ Toys During The Impeachment Trial
Politics
2
DOJ Concedes That Two Of Its Carter Page FISA Orders Were 'Not Valid'
Politics
3
Dad Confronts Warren On Student Loan Forgiveness: 'Can I Have My Money Back?'
Politics
4
Chuck Schumer Attacks Fox News At Impeachment Press Conference
Politics
5
German Authorities Find ‘Weapons Of War’ During Raid Near Radical Mosque
World