America’s carbon dioxide (CO2) emissions have fallen 12 percent since 2005, due to increased natural gas production from hydraulic fracturing, or fracking, according to a report published Monday by the Energy Information Administration (EIA). 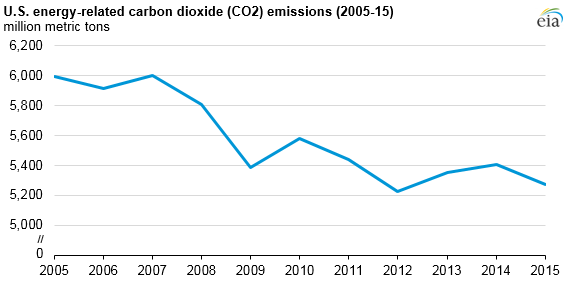 Fracking, not government green policies, has caused CO2 emissions to drop sharply in 47 states and Washington, D.C., according to both Scientific American and other studies by the EIA.

Fracking cut more CO2 emissions than solar or wind power, according to a study published last November by the Manhattan Institute.

“The transition from coal to natural gas for electricity generation has probably been the single largest contributor to the … largely unexpected decline in U.S. CO2 emissions” says Berkeley Earth, concurring with more formal assessments from the Department of Energy.

U.S. greenhouse gas emissions have dropped by 1,022 million tons, making them significantly lower than their peak in 2007.

The U.S. has reduced greenhouse gas emissions more than in any other country, a fact that even The Sierra Club acknowledges, though the group refuse to attribute the decline in emissions to natural gas a source of energy they oppose politically.