Facebook users widely perceive a left-wing bias on their news feeds regardless of whether they are politically left, right or center.

According to a former employee, stories about the Conservative Political Action Conference, former Gov. Mitt Romney, and Sen. Rand Paul were blocked from trending on Facebook, despite the fact these stories met criteria to be listed as highly influential. (RELATED: Former Facebook Insider: We Buried Conservative News)

A new YouGov poll of British Facebook users from across the political spectrum shows they perceive a political skew to the left on their news feeds. 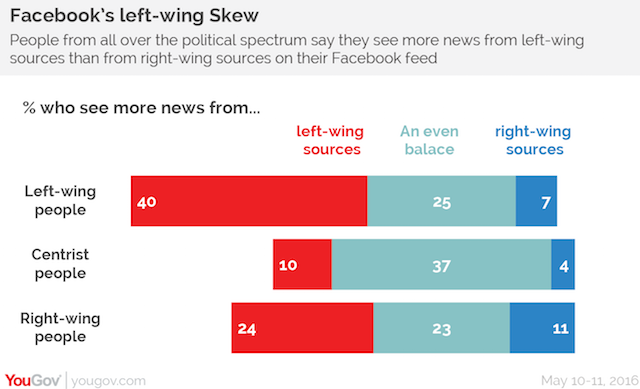 YouGov points out people tend to surround themselves with those who already agree with them, so it shouldn’t be surprising Facebook’s newsfeed algorithm shows left-wing people more left-wing news.

“What is surprising is how this rings true for people on the right (24 percent see more news from left-wing sources, 11 percent from the right) and to a lesser extent people from the center (10 percent and four percent respectively),” says YouGov’s Will Dahlgreen.

There is little evidence to suggest major impact from more left-wing voters being on Facebook than right-wing people.

“According to our research this effect may be small, however – 74 percent of 2015 Labour voters are a member compared to 71 percent of Conservatives,” Dahlgreen says.

Age may be a bigger explainer than party membership for the left-wing skew. “Undoubtedly there are more young people, who are less likely to describe themselves as right-wing (15 percent of 18-24s compared to 39 percent of over-65s) on the social network. This is likely to explain a large part of the phenomenon.”