In a shocking turn of events, a new Washington Post poll claims that 9 out of 10 Native Americans are not offended by the Washington Redskins’ team name.

The poll surveyed 504 Native Americans in every state and the District across a five-month period ending in April and found that responses to the issue “were broadly consistent regardless of age, income, education, political party or proximity to reservations.” 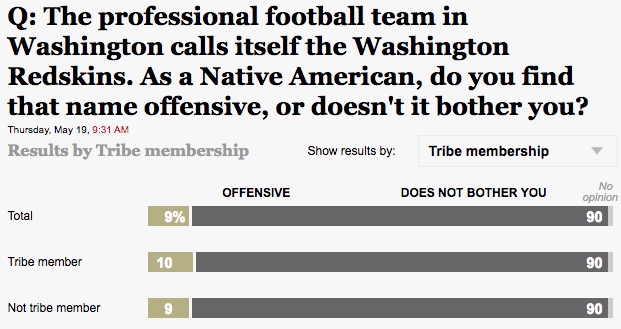 Additionally, more than 70 percent of participants did not view the term “Redskin” as disrespectful to Native Americans, and nearly 80 percent stated they would not be “personally offended” if a non-Native American person called them that name.

Several survey participants even told the Post they take pride in the name.

Barbara Bruce, a teacher who has lived on a North Dakota Reservation for most of her life, claimed she’s “proud of being Native American and of the Redskins.”

“I’m not ashamed of that at all. I like that name.”

“I really don’t mind it,” stated Gabriel Nez, a Navajo criminal justice student. “We call other natives ‘skins’ too.”

It should be noted that the Post admits its findings run contrary to its own editorial stance on the issue, which has previously called upon Redskins owner Dan Snyder to initiate a name change.