In that over-polished Washington way.

We find his twin in Shrek‘s Lord Farquaad, the villainous character who’s voice is John Lithgow.

Write-ups of the film remark on Farquaad’s stature, which is pint size. As the story goes, he’s not important enough to be king until he marries a princess. So he chooses Princess Fiona. But in order to marry the princess he has to rescue her from a tower. He’s lacking in height…this is a problem.

Another serious problem is that Fiona will turn into a monster at sunset. Farquaad sees her as an “ogress” before he marries her and of course rejects her before the vows are completed because she’s not a “10.”

In the end, Farquaad is eaten by a dragon — the dragon that was protecting Fiona before she turned ugly.

Fallon’s wife is nothing like Fiona. She’s Katherine Beirne and the couple was married in December, 2011. According to a NYT wedding piece, they worked together at the Senate Democratic Policy and Communications Center. She was staff director. He was the communications director.

He was (as far as we know) never burped up by a dragon. 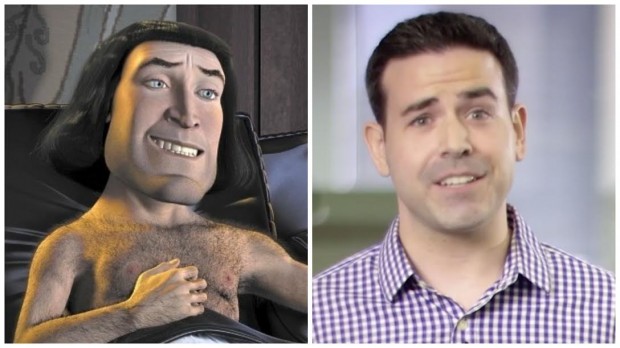