Conservative provocateur and British journalist Milo Yiannopoulos was paraded into his University of California, Santa Barbara event on Thursday to the tune of “America, Fuck Yeah.”

As part of his “Feminism is Cancer” lecture series, Yiannopoulous was carried like a king on the shoulders of “Make America Great Again” hat-wearing fans. Yiannopoulous refers to Donald Trump as “Daddy.”

According to The College Fix, during his Thursday speech, Yiannopoulos “mocked modern feminist icons Lena Dunham and Amy Schumer, and joked that if women worked longer hours maybe the wage gap would shrink.” 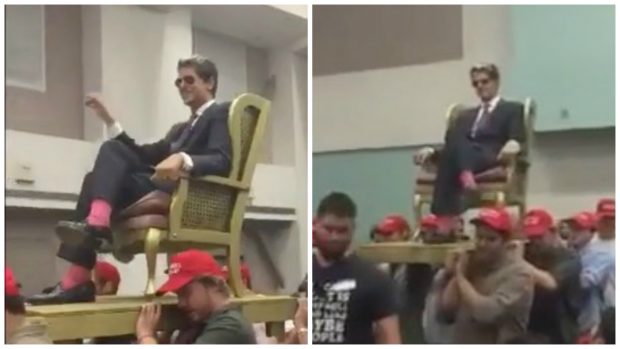 He added: “feminists don’t have much to complain about. They have been successful in achieving their right to vote, equal access to education and much more because of the western capitalist society – the only system that has rewarded these rights en masse.”