In city where the first atomic bomb used in warfare was dropped, President Barack Obama said while “We may not be able to eliminate man’s capacity to do evil,” nations  must “pursue” a world without nuclear weapons.

Speaking from Hiroshima, Japan on Friday, Obama said, “Seventy-one years ago on a bright cloudless morning, death fell from the sky and the world was changed.”

“A flash of light and a wall of fire destroyed a city, and demonstrated that mankind possessed the means to destroy itself,” Obama said.

While Obama did not expressly apologize during his speech, he said, “Why do we come to this place, to Hiroshima? We come to ponder the terrible forces unleashed in the not so distant past. We come to mourn the dead … their souls speak to us and they ask us to look inward. To take stock of who we are and what we might become.”

Later, Obama said, “Yet in the image of a mushroom cloud that rose into these skies, we are most starkly reminded of humanity’s core contradiction. How the very spark that marks us as a species, our thoughts, our imagination, our language, our toolmaking, our ability to set ourselves apart from nature and bend it to our will — those very things also give us the capacity for unmatched destruction.”

“We may not be able to eliminate man’s capacity to do evil, so nations and the alliances that we form must possess the means to defend ourselves,” Obama lamented. “But among those nations like my own that hold nuclear stockpiles, we must have the courage to escape the logic of fear and pursue a world without them.”

While the president was in Japan, he laid a wreath at the Hiroshima Peace Memorial Park. 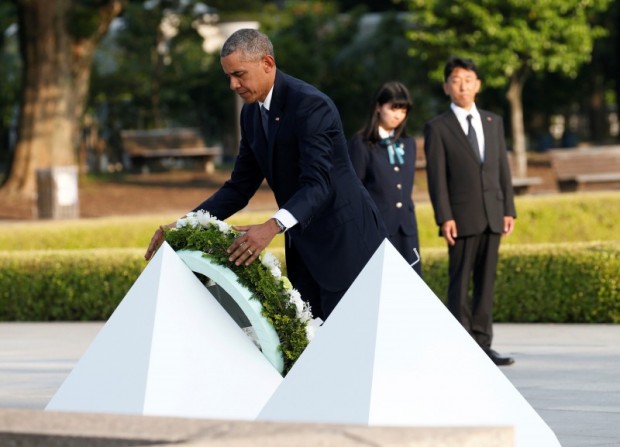 Obama lays a wreath at a cenotaph at Hiroshima Peace Memorial Park, Reuters