Katie Couric’s gun documentary “Under the Gun” has been suddenly pulled from EPIX’s website. 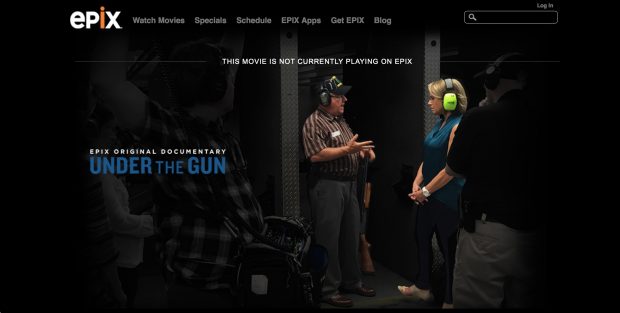 “Under the Gun” (Screenshot Epix)

An attempt to stream the movie on EPIX.com is now met with the message “THIS MOVIE IS NOT CURRENTLY PLAYING ON EPIX.”

Couric’s film has drawn intense criticism after she was caught deceptively editing interviews with members of the Virginia Citizens Defense League. The resulting edits made it appear as if the pro-gun activists were baffled by a question on background checks. (RELATED: SHOCK AUDIO: Katie Couric Edited Gun Documentary To Silence Pro-Gun Opinions)

“I take responsibility for a decision that misrepresented an exchange I had with members of the Virginia Citizens Defense League,” Couric said in a statement. (RELATED: Katie Couric Finally Apologizes For Deceptive Editing Of Anti-Gun Documentary [VIDEO])

UPDATE: EPIX explained the situation to the Washington Examiner in a statement saying, “As of today, the doc moves out of the premium window – off of EPIX – and into a transactional and [electronic sell-through] window. This is part of the original agreement struck when we acquired the doc,” she added. “The distribution strategy allowed us to premiere the doc on the network and also preserve maximum value for the transactional VOD and EST windows that follow.”