“Your selfies have grown excessive. May I suggest trying sex as a way to feel good about yourself instead.”

— The Federalist senior contributor Rich Cromwell, who explained to The Mirror that he was directing his message to “no one in particular. Tweet came out of a convo about people who selfie constantly, particularly past age 30.”

IN MY INBOX: These are the kind of loving sources I have in this business…

“I keep as much distance from you as possible.” — Anonymous.

“At what point does Trump ban all media outlets and name Breitbart as the only worthy chronicler of all things Trump? In the first 100 days?” — Amanda Carpenter.

“Pickup line I used today at the mall at @sunglasshut: ‘Woah man. These glasses were fine until I turned your way.’ I got her number.” — Teen journo CJ Pearson, whose work has appeared in HuffPost, Daily Caller and other outlets.

“Trump decredentialing WPost is gross, but worth saying: the most important journalism isnt done at credentialed events. Its digging stuff up.” — David Sirota, International Business Times.

Will a Donald Trump presidency include wedgies?

“I can’t wait for Trump to give other world leaders wedgies & swerlies at the G20.” — IJ Review’s Benny Johnson.

“So my ankle is fractured in 3 places come sign my cast and feed me pizza while I’m high on pain meds
Special shout out to Michael Robbins for getting me to the doctor!!!” — publicist Jessica Hoy.

“I am as left wing/liberal/tolerant/atheist as can be. Interact, spend time with folks of all religions. But seems dishonest not to name this.” — Brian Koppelman, co-creator and executive producer of Showtime’s “Billions.”

“I am getting more&more serious about joining the Army National Guard. Days like today push me. I want 2do something. But what? Right choice?” — Robert Wargas, foreign correspondent, Catholic Herald.

“And with this, I am signing off from this nightmarish day in the newsroom… knowing my nightmare pales.” — Amy La Porte, Aussie reporter, CNN. She posted the following from Andy Carvin, of First Look Media: 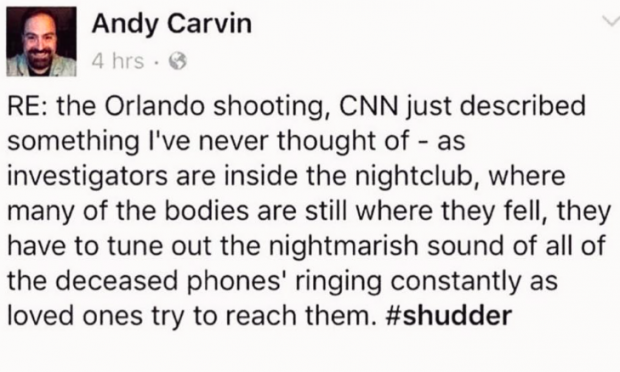 Gene Weingarten tries to be funny about Trump, but fails

“This is getting truly great, Trumpwise. There’s nothing humor writers can write that beats the news here. We bow.” — WaPo “humor” writer Gene Weingarten.

Dreyfuss is the social media engagement editor for Mother Jones. He’s a Mirror regular. This is a special tribute to Dreyfuss (son of you-know-who) on his birthday. On Monday night he tweeted: “A funny thing to do is ask people in a bar to draw photos of their fathers’ dicks.” (This quote epitomizes why The Mirror loves featuring Dreyfuss.) 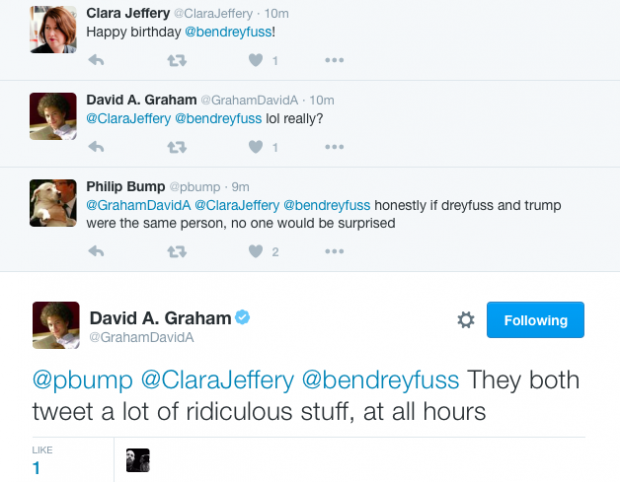 “I think I may root for Kevin Love because I know he hates Lebron more than I do.”

“Give Bron Bron credit. He knew if he bitched enough about Draymond Green and got him suspended he’d have 1 game where he could play well.”

“I award Lebron James zero credit for tonight. He had to bitch and moan to get Draymond suspended who owns him. #sad.”