Fox News’s senior judicial analyst Andrew Napolitano says that the Orlando terrorist attacker’s wife could face the death penalty as a result of her role in the terrorist attack. 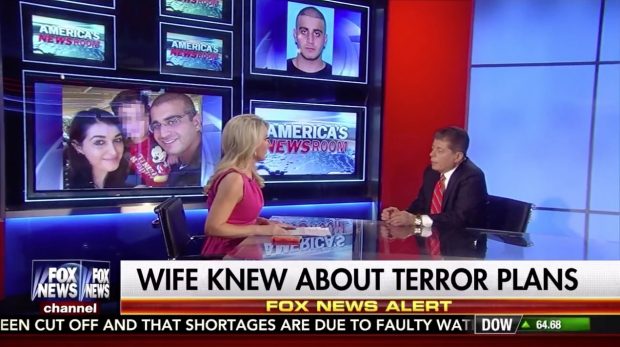 Appearing on “America’s Newsroom” Wednesday, Napolitano said, “There’s a long list of charges that she could face, from providing assistance, to agreeing to participate.”

Noor Zahi Salman, Omar Mateen’s wife, knew of Mateen’s plans but did not stop him, reports Fox News. Moreover, Salman said that she was present when Mateen bought ammunition and a holster. Last Sunday, Mateen killed 49 people at a gay nightclub in Orlando, Florida.

“The highest and greatest charge, the reason I mention this is because the federal government likes to charge you with the highest and greatest charge supported by the evidence, would be conspiracy to commit mass murder,” Napolitano said. “A conspiracy is an agreement by two or more people to commit a crime. Once the crime is committed and the person actually commits it is dead, the remaining conspirators in this case one person we believe, is as liable as the person who pulled the trigger.”

As a result of her role, Napolitano said, Salman could face “the death penalty.”

“Now, I don’t know if the federal government wants to pursue that with her, they probably will because by charging her with the highest and greatest crime they would expect her to plead guilty to something less which would incarcerate her for the rest of her life, get a dangerous person off the street, send a message to other bad guys and other confederates ‘We will come after everybody that we can.'”

Referring to the guidance of “see something, say something,” Napolitano says that Salman might have had a “legal” obligation to tell authorities about Mateen’s plans.