Speaking to reporters at Monday’s White House briefing, White House Press Secretary Josh Earnest claimed that the Obama Administration had nothing to do with selectively censoring transcripts of the 911 call Orlando terrorist Omar Mateen made the night of his deadly attack.

“This obviously is pursuant to an ongoing law enforcement investigation,” Earnest stated. “The release of the transcripts was one that was made solely by the Department of Justice and FBI officials. They’re doing that consistent with their assessment about the best way to advance the investigation, so for questions about the transcripts, I’d refer you to them.” (RELATED: Paul Ryan Calls ‘Selective’ Editing Of Orlando Terrorist Transcript ‘Preposterous’) 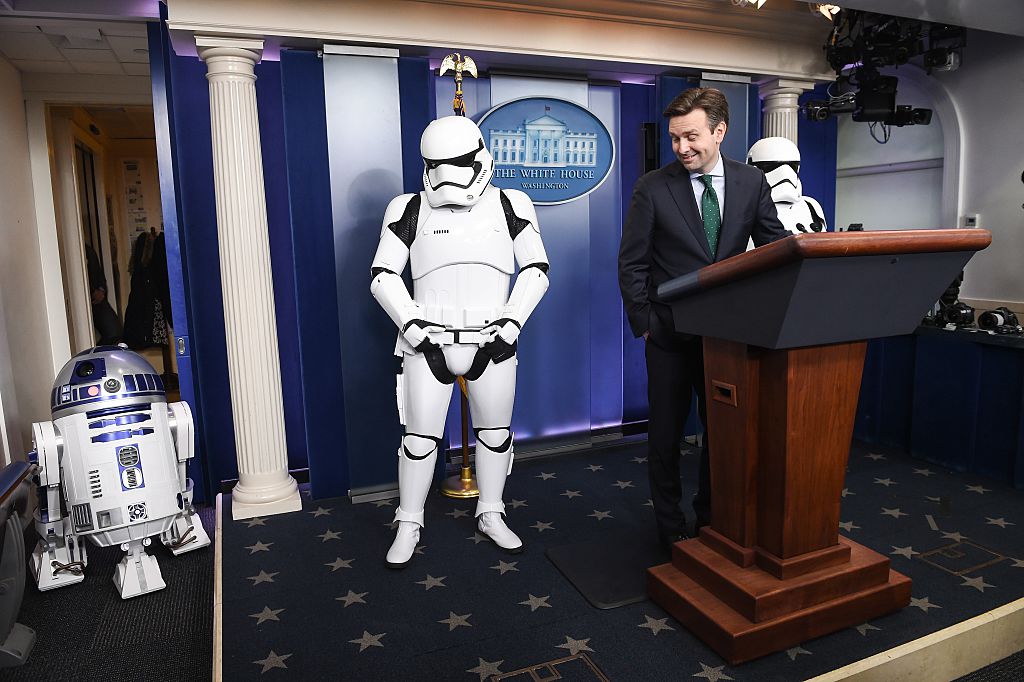 Josh Earnest speaks to the press in the briefing room at the White House with R2D2 and Storm Troopers. (Getty Images)

“I’m saying that all of the decisions about releasing the transcripts were made by Justice Department officials,” he clarified. “The opinion of the White House is that we should not interfere with an ongoing law enforcement investigation, and rather that those decisions should be made consistent with the assessment law enforcement officials have made about advancing that investigation.”

On Sunday, Attorney General Loretta Lynch announced that the Justice Department would release the transcripts of Mateen’s calls Monday, but that those transcripts would not contain Mateen’s pledge of allegiance to the Islamic State. (VIDEO: Lynch — Feds Will Censor Orlando Terrorist Call Transcripts To Omit ISIS Pledges)

In addition to scrubbing Mateen’s ISIS pledge, several conservative news outlets noticed the transcripts had translated “Allah” to “God,” though Mateen spoke the name in Arabic.

OD: Emergency 911, this is being recorded.

OM: In the name of God the Merciful, the beneficial [in Arabic]

OM: Praise be to God, and prayers as well as peace be upon the prophet of God [in Arabic]. I let you know, I’m in Orlando and I did the shootings.

OM: My name is I pledge of allegiance to [omitted].

OM: I pledge allegiance to [omitted] may God protect him [in Arabic], on behalf of [omitted].

“This isn’t simply a translation,” Katie Pavlich wrote for Townhall. “This is the Obama administration avoiding any reference or connection to Islam.” (RELATED: Terror Expert — Obama’s Counter-Terrorism Policies Practically Guarantee Another Attack Before The Election)

“Could it be because Americans will hear Omar Mateen speaking Arabic and saying the words we hear so often, “Allahu akbar,” debunking the narrative again that the attack on Pulse Night club had little to do with Jihad?”

1
New York Times Writer Claims Property Destruction Is 'Not Violence'
Politics
2
Looters Argue With Armed Store Owners 'About Why They Can't Break In' On Live TV
US
3
'If I Didn't Have A Primary I Wouldn't Care': Dem Congressman Caught On Hot Mic At Press Conference
Politics
4
Florida Sheriff Cautions Rioters, Says He Encourages Citizens To Defend Their Homes With Guns
US
5
Black Firefighter Spent His Life Savings To Open A Bar. Then Minneapolis Looters Burned It Down
US