A Democrat running for state representative in Indiana who was recently endorsed by the party’s nominee for governor wants to “team up” to “punch…out” a Republican political operative, she recently wrote on Facebook.

Kim Fidler, who is running for a seat in the 44th House District, was seemingly angered that a tracker for the Republican group America Rising was videorecording gubernatorial candidate John Gregg at a June 11 campaign event.

The former speaker of the Indiana House, who is challenging incumbent Gov. Mike Pence, endorsed Fidler, who serves as an official with the Indiana State Teachers Association, at the rally.

“This disgusts me. This person spends her days stalking John Gregg,” Fidler wrote on Facebook of the tracker, a woman in her 20s.

Tracking is a common campaign practice in modern politics. Most major political races have trackers working on both sides. Such is the case in Indiana where Democrats are also tailing Pence in hopes of recording footage of a gaffe or embarrassing moment.

“I do not know who hired her or any of her personal info,” Fidler wrote in a comment on her original post.

“I’d probably punch her out,” one of Fidler’s followers replied.

“I would want to also,” Fidler responded.

“Wanta team up?” the other woman asked.

“Absolutely. We have each other’s backs!” said Fidler. 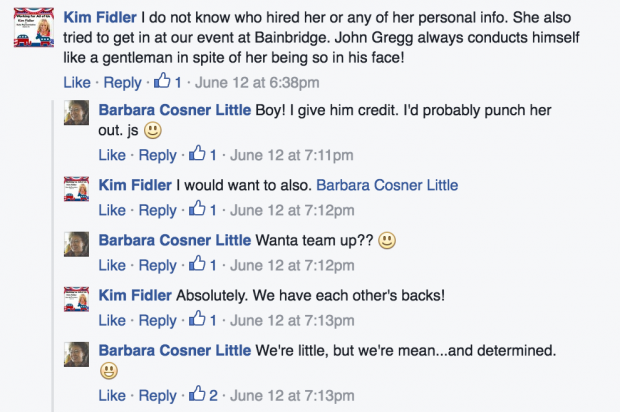 A spokeswoman for America Rising issued a statement calling out Fidler’s “violent rhetoric” and says that Gregg should denounce it.

“It’s absurd that John Gregg — a candidate for statewide office in a major race — has complained about routine campaign tactics while turning a blind eye to his allies’ outrageous, violent rhetoric,” America Rising PAC press secretary Amelia Chassé told The Daily Caller in a statement.

“John Gregg needs to tell Indiana voters whether he will stand by someone who incited violence against a young woman for simply doing her job, just hours after receiving his endorsement. Mr. Gregg should be ashamed of himself.”