The identity of the police officer in the following story is being protected, so there are two possible responses to it. If the cop is white, then this young man’s death is clearly a case of racism. If the cop is black, it’s a case of institutional racism.

A former Affton High School football standout forced his way into a South County home and was shot and killed by an off-duty officer inside after a Facebook dispute over Black Lives Matter apparently boiled over late Saturday afternoon.

That’s what can be pieced together from the accounts of police and an uncle of Tyler Gebhard, who said the young man had been struggling with mental health issues…

Gebhard and the police officer he befriended at a local church had clashed recently on Facebook over his nephew’s support of Black Lives Matter.

Now, you might say that the officer was protecting his family against a violent attacker who broke into his house. Maybe that’s how you justify this cold-blooded murder.

But hold up a second, you cracka-ass crackas. Check your privilege and look at this picture of Tyler Gebhard: 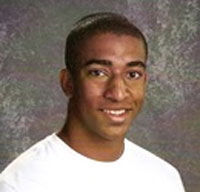 Yeah, that’s right. Nothing to say for yourselves now, huh, white folks?

Obama doesn’t have a son, but if he did, he’d look like Tyler Gebhard. Shame on you, white America. Shame, shame, shame.

Another black man shot by the police. Another innocent life that doesn’t matter to you people. #ShakingMyDamnHead