No, there is not a small, picturesque town in Italy called Titty City.

Politico reporter Ken Vogel is visiting the country of exquisite pizza, Eat, Pray, Love and the Pope before he heads off to the presidential conventions in Cleveland and Philadelphia.

And apparently Vogel decided to have some fun.

“Fun pre-convention Italian vacation,” Vogel wrote on his social media page along with this photograph. 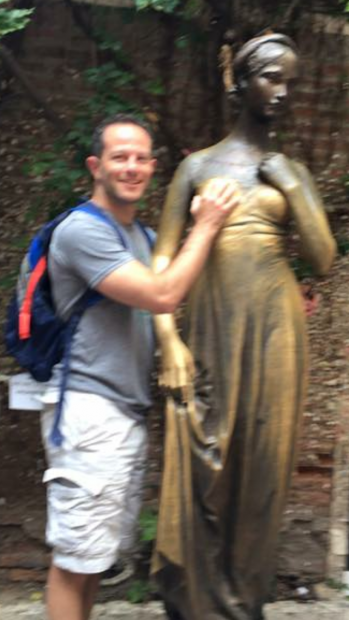 The Mirror imagines Vogel — who has a decent sense of humor — was just being playful. Otherwise it’s not entirely clear whey he cupped a breast on a female statue.

The Mirror reached out to him by email to inquire. (To be fair, it was the middle of the night Italy time when the email arrived.).

Alas…he has an automatic reply, saying, “Thanks for your email. I’m on vacation until Friday, 7/15.”

Memo to Vogel: Please enjoy the rest of your vacation.

UPDATE: The whole thing is not as bizarre as it seems. “That’s a statue of William Shakespeare’s character Juliet in Verona (where Romeo & Juliet is set) and touching the right breast is supposed to bring luck,” he explained to The Mirror in the middle of the night while I was sleeping. Vogel created a vine of the thousands of tourists who do it each day.” Also: that photo was one of 10 in a post under “Fun pre-convention Italian vacation,” which includes photos of his wife and Vogel “biking in wine country, eating at restaurants and goofing around.”