A House Foreign Affairs Subcommittee met Thursday to address the alarming issue of international parental child abduction of children born in the United States and taken against their will by one of their own parents to foreign countries.

Four parents of abducted children offered testimonies before the subcommittee as many more stood in the back of the room holding posters of their own children who have been abducted. The four testimonies revealed that despite years of determined efforts and legislation — such as the “Sean and David Goldman International Child Abduction Prevention and Return Act of 2014” — the parents feel powerless in securing the return of their children. 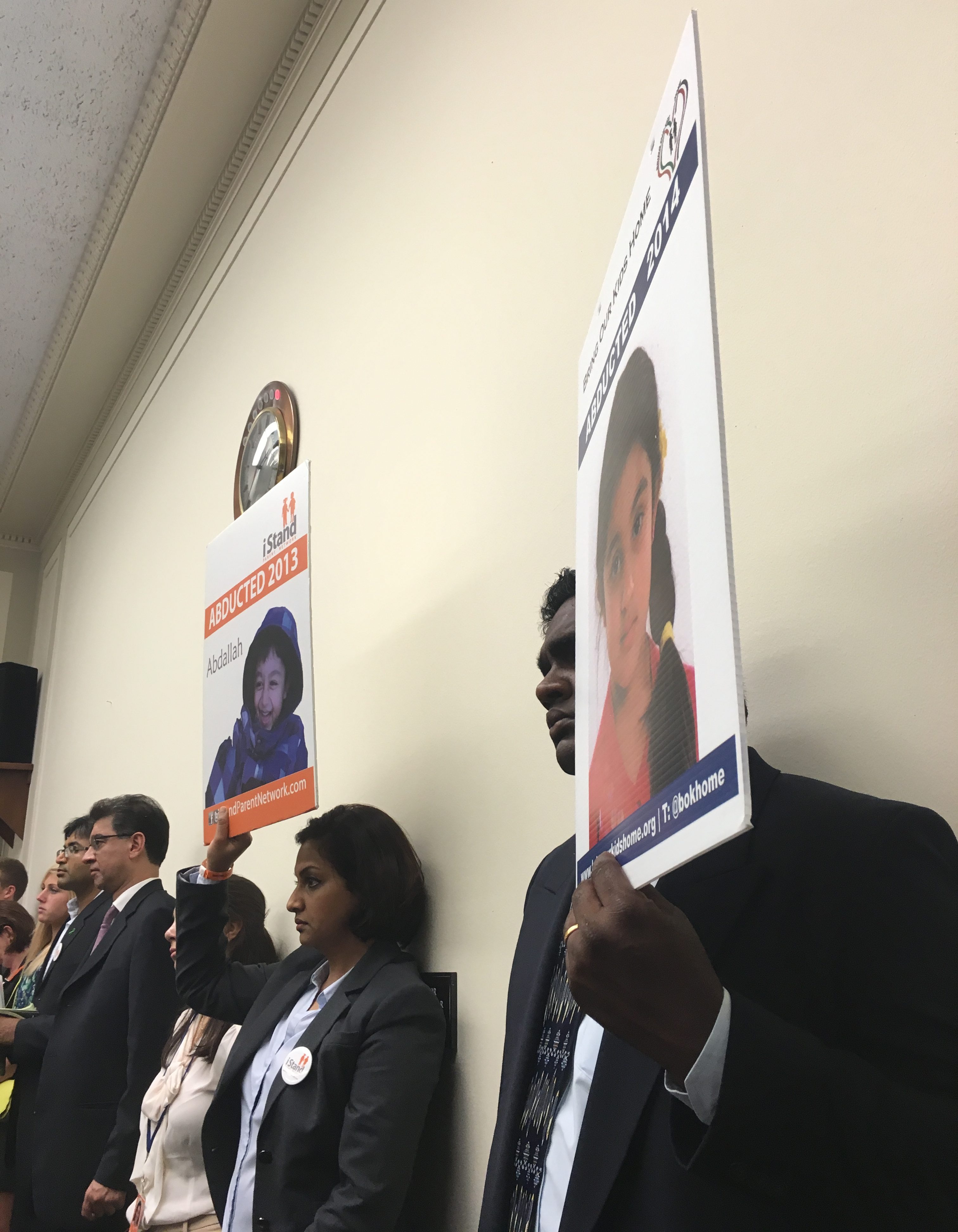 Parent’s of abducted children in attendance (Photo by Ford Springer)

New Jersey Representative Christopher Smith, Chairman of the subcommittee, is the prime sponsor and author of the Goldman Act. The Act requires an annual report of both abductions of children and their return to the United States. The State Department was over two months late in delivering this year’s report. “Two months of powerlessness for desperate parents and two months of judges making decisions without the information they need to prevent abduction,” Smith said of the delay. Thursday’s hearing was “intended to press the State Department to comply with the Goldman Act immediately and deliver [the] overdue report.”

The hearing began with a statement by Chairman Smith, after which he addressed Deputy Assistant Secretary Karen Christensen, of the U.S. Department of State, who sat before the subcommittee. Chairman Smith and Deputy Assistant Secretary Christensen engaged in a lengthy discussion about the report that determined that there are approximately 1,000 children who remain abducted in foreign countries. The majority of the children that remain in abduction are being held in the 16 countries that are non-compliant to both the Goldman Act and the Hague Convention of 1980.

Four parents delivered their heart-wrenching testimonies before the subcommittee describing their inability to achieve justice in their efforts to get their children back. All four parents discussed their failed deliberations with foreign governments and the years of pain they have been forced to endure in the absence of their children.

Edeanna Barbirou, who appeared before this same committee a year ago, still has not recovered her son, Eslam who was taken from her nearly five years ago. The Goldman Act “is a source of hope in the otherwise dim realities” that left behind parents “lives become after our children are snatched from our lives,” Barbirou said. “It is a source of hope that finally the right tools will be utilized to secure justice for our innocent children ensuring the full-force of the American government to secure their rights of protection as citizens to return home where they belong.”

Although Barbirou has confidence in the Goldman Act she believes it “has only been enforced to the least extent possible and mostly in demand and review of annual compliance reports,” that offer some insight, but do not bring abducted children home. Her son, Eslam remains illegally detained in Tunisia by his father.

Both Chairman Smith and the parents of the abducted children are unsatisfied with the reports since the enactment of the Goldman Act in 2014 and hope this year will return much-improved results. “The Goldman Act, as it is written,” Barbirou proclaimed, “is a fair and powerful law that includes strong remedies which, if applied, will result in the return of our illegally detained, abducted children abroad.”

She called on every representative of every government agency to help bring the thousands of abducted children abroad back to their homes in the United States.