“This is not the Republicans versus the Democrats. This is the elites of the Republican and Democratic party who have driven this country versus Donald J. Trump and the rest of America,” Roger Stone, longtime political consultant and Trump confidante, said during his speech.

Stone was one of many speakers present at the rally. The other major speakers included Infowars founder Alex Jones, Breitbart Tech editor and internet provocateur Milo Yiannopoulos, and Donald Trump super-fans Diamond & Silk. As Diamond would deliver her speech arguing that they weren’t strippers but “stripping away the BS,” Silk would act as a hype-man and repeat the last word of a sentence or say “that’s right.”

The event was long though, scheduled from 11:30 to 5:30 and in between the bigger name speakers people like Paul Jing of Asians for Trump would speak. Bikers for Trump, Christians for Trump, and a black man supporting Trump were also all represented. The crowd would dissipate during these moments. It seemed to fluctuate from 200 attendees to close to 400 attendees, about 50 of which were media. 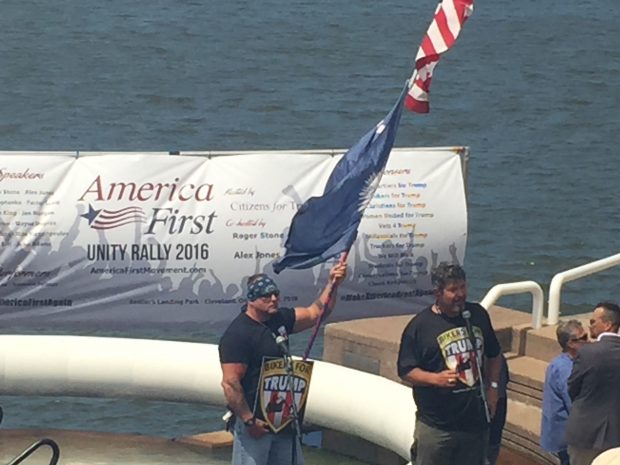 The people were most excited for Alex Jones to speak. The event at Settler’s Landing Park was hosted by Citizens for Trump and sponsored by Infowars and StoneZone, Roger Stone’s website. This was clear by the attire of the event, as it seemed the majority of people were wearing Infowars branded t-shirts.

One lady to take the stage, Kate Kopenko, a 16-year-old immigrant from Russia sang a pro-Donald Trump song and donned a t-shirt with the cover of Stone’s “Clinton’s War on Women” book. “Political correctness, political correctness,” was one of the lines Kopenko belted out.

Jones echoed this disdain with political correctness in his speech. He asked colleague Joe Briggs on stage if they had given the elites a “big red, white, and blue middle finger!” Briggs, before the event, had to borrow a pen from this reporter as Infowars fans were requesting autographs.

The rhetoric was not light at the event as Jones accused Hillary Clinton of being a “foreign agent” of communist China and Saudi Arabia. He also brought on stage a likewise incendiary comedian Eric Andre, from Adult Swim. Jones had actually confused him for Daily Show host Trevor Noah. Andre proceeded to yell in the microphone that he wanted Jones to “have sex with my wife” and proceeded to brandish a hotel room key.

Andre said he was a big fan of Jones and asked him about what happened in World Trade Center Tower 7.

Jones finished his speech by telling the crowd, “I salute you!”

Stone would later take the stage in a stylish off-white suit, he would later take it off saying it was a “move I learned from James Brown.” In his speech Stone positioned the Trump candidacy as not a wholly Republican one. “It is sadly the two-party duopoly that has given us endless war, erosion of our civil liberties, massive debt and borrowing,” Stone said, railing against both parties.

There were frequent shots at Republicans throughout the event. When John McCain’s name came up the crowd booed, Tom Ertl of Christians for Trump spoke of “Lyin’ Ted,” and Ralph King, a tea party organizer, said “Jim Jordan and his House Fraud Caucus.”

It should be noted Ertl told The Daily Caller exclusively an important personal reason for his Christian support of Donald Trump. He described Trump as having “God-given alpha male abilities.”

Milo would eventually take the stage wearing a black bulletproof vest, or as he described it a “practical but stylish vest.”

Like earlier speakers, Milo took shots at conservatives, after speaking of “SJW midgets” he said, “speaking of midgets, Ben Shapiro.”

Once he stayed on topic though, Milo delivered a coherent speech on political correctness and Islam. The outspoken gay writer at one point pointed out towards a man waving a gay pride flag. 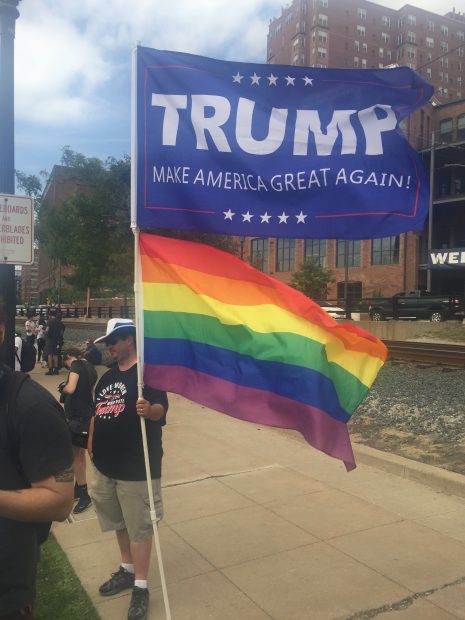 Milo said, “I might be a dick sucking faggot but I hate the left.” He argued liberals were trying to “destroy all that makes America great.”

Yiannopoulos spoke about the dangers Islam in general not just radical Islam created towards gay men like him. Milo acknowledged there are evangelical Christian Trump supporters in the crowd but argued “you might not be down with the gay lifestyle but we’re your gays not theirs.”

“We have to ask ourselves how many jobs have Hillary created? Maybe that one with Monica Lewinsky and Bill,” Diamond said to laughter during her speech.

Milo also took his own turn with dirty humor. “Better to die on your feet than live on your knees,” Milo said, echoing the yell of an attendee, before interjecting “but I do live on my knees.”