Immigration and Customs Enforcement (ICE) has been the least productive it has been in years according to an analysis released Tuesday of ICE figures.

“By every measure, ICE is doing less and less enforcement. According to the agency’s key metrics – Encounters, Arrests, Detainers, and Charging Documents Issued – fewer aliens have been put on the path to deportation in 2016,” Jessica Vaughn, director of policy studies at the Center for Immigration Studies (CIS), wrote in a recent report.

One of the figures ICE uses to measure their enforcement activity, encounters with illegal aliens, isn’t even being reported anymore by the agency. Arrests by ICE is down ten percent from last year, and detainers issued to deport aliens in custody by law enforcement agencies by ICE are down 16 percent from 2015. 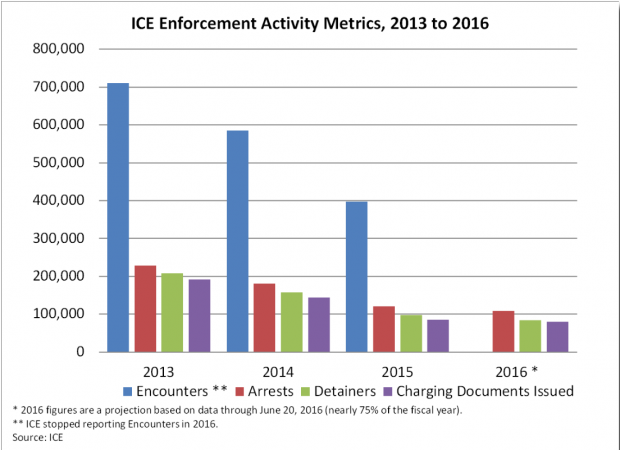 In addition, according to CIS estimates, ICE is on pace to deport the fewest illegal immigrants, 230,000, since 2006. This is a steep decline as over 400,000 deportations took place in 2012. (RELATED: Nearly 1 MILLION Illegals Have Removal Orders And Are Still In The U.S)

The Obama administration has framed its immigration enforcement policy as one that prioritizes the deportations of criminal illegal aliens. However, CIS estimates show ICE is on pace to deport 59,000 criminal aliens this year. That is 60 percent fewer criminal alien deportations than 2011.

The Obama administration has defended ICE’s record, pointing to the fact the agency has had more deportations under President Obama than former President George W.Bush, but a look closer at the figures paints a different picture.

Seventy-two percent of ICE deportations are aliens crossing the border who have been turned over to the agency. “In previous administrations, border crossers did not make up a large share of deportations credited to ICE. The inclusion of hundreds of thousands of border cases in ICE deportation totals became the basis for deceptive Obama administration claims of “record deportations” beginning in 2012, when in fact, deportations resulting from interior enforcement were dropping sharply,” Vaughn writes in the report.

ICE has also been failing to live up to Congressional mandates. ICE is expected to maintain on a daily average of 34,000 detained aliens. They are short of this by 16 percent.