In search for a running mate, Hillary Clinton recently told several candidates on her shortlist that she wanted someone with a background in national security.

The masses took to social media, wondering, if she can’t sell her experience as secretary of state, what is she selling?

Members from every side of the political spectrum voiced their confusion over Clinton’s statement — from Republican National Committee communications director Sean Spicer, to Democratic pollster Anna Greenberg, to members of the general public.

Remarkable: despite having been secretary of state, Clinton still needs a VP to strengthen her nat sec bona fides https://t.co/v8IGsFSSK2

And why does HRC need VP with nat’l security experienc? Clinton Is Said to Seek National Security Experience for VP https://t.co/RqVL9Zqfws

Some also pointed out that her campaign against Bernie Sanders was fought on the basis of her experience as the secretary of state. One reason she was able to defeat Sanders is because she pandered to the same progressive agenda as he did, but brought more experience in national security and policy. Sanders supporters voiced frustration that Clinton is reverting to her old platform now that Sanders is out of the race. 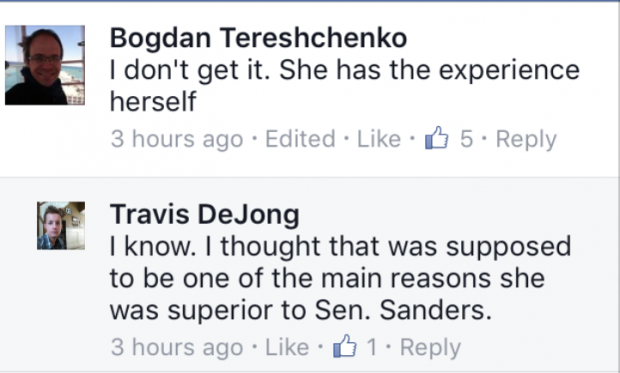 Others further joked that this was one of the best idea Clinton has had so far.

It is expected that Clinton will roll out her vice-presidential pick at some this weekend. The names on Clinton’s current shortlist include Democratic Virginia Sen. Tim Kaine, Agriculture Secretary Tom Vilsack and Adm. James Stavridis.

1
Tucker Carlson Insists Biden 'Will Not Be The Democratic Nominee.' Here's Who He Predicts Will Assume The Mantle
Media
2
Trish Regan Out At Fox Business
Media
3
'Shocking' And 'Hackish': Media Pundits Attack Dr. Birx After She Touts Trump's Response To Coronavirus
Media
4
'Don't Be A Cutie Pie': Trump Mocks ABC Reporter During Coronavirus Briefing
Politics
5
Joe Biden Accused Of Sexually Assaulting Former Staffer: 'Penetrated Me With His Fingers'
Politics