QUOTES OF THE DAY:

“This convention is a total mess.”

“I’m sure Milo has some tricks up his sleeve, but losing access to Twitter’s megaphone is losing a major speaking platform.” 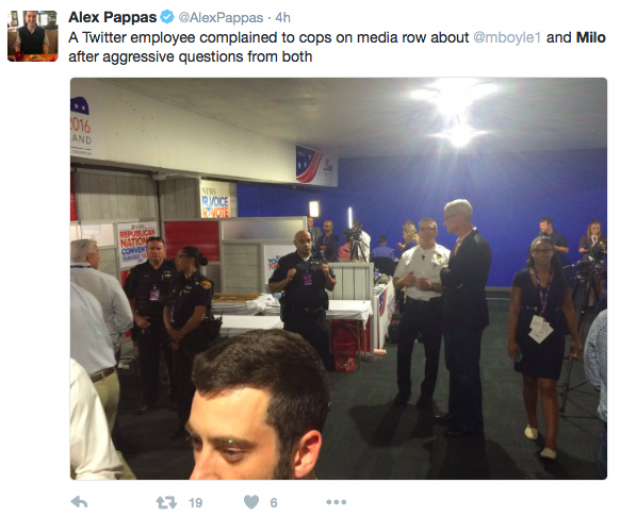 “Is it me or does Trump really seem to give zero fucks about his sons?” — John Stanton, BuzzFeed.

Also: “What’s up with republican delegates wearing the same outfits like an inbred church group on vacation?”

“HEIDI CRUZ escorted out by security as crowd gets angry at Cruz for his speech. One Trump supporter shouting ‘Goldman Sachs!’ at her.” — CNN’s Manu Raju.

And this reporter wants to rewind…

“I want to rewatch that Cruz speech so I can pinpoint the exact moment when the crowd realized.” — The Atlantic‘s Matt Ford.

“I confess I rolled my eyes earlier today when I saw that Cruz still had his earpiece-wearing, campaign security team w/ him. Now I see why.” — Jason Zengerle, GQ, New York Mag.

“I’ve said it before, and I’ll say it again. Ted Cruz is Canada’s revenge on the U.S. for acid rain. #RNCinCLE #gopconvention” — Rep. Alan Grayson (D-Fla.).

“You can always count on Cruz to be the biggest dick in the room, to give exactly 0 fucks, and to stab you in the eye, not the back #RNCinCLE” — Liz Mair, communications strategist.

#NeverTrump editor weighs in on the GOP convention

“Has one speech in this convention even tried to appeal to people who aren’t already devoted Republicans?” — Philip Klein, Washington Examiner.

Roger Stone on Ted Cruz to Yahoo News: “If it were up to me, ‘Fat Dracula’ would not be speaking tonight. I speak only for myself. He called me much worse.”As for ex-Trump campaign manager Corey Lewandowski, he’s a “pimple on the ass of history.”

“Even bad people who tweet disgusting things should be allowed to speak. Which is why Milo should not be banned from Twitter.” — Ben Shapiro, ex-Breitbart News editor-at-large who is now editor-in-chief for DailyWire.com.

“As a lawyer, I applaud your instinct to sue over anything. Also, as a lawyer, suing Twitter for banning Milo is not a good lawsuit.” — Gabriel Malor, The Federalist, HotAir.

“MILO DID NOTHING WRONG” — Breitbart News.

“Waiting for one of the articles on Twitter’s Milobanning 2 show example where he ‘directed’ others 2 harrass someone.” — liberal writer Mickey Kaus.

“I can’t see Callista up close because of the A/V malfunction. Is her hair spherical tonight?” — Business Insider‘s Josh Barro.

And a note on Eric Trump’s hair…

“Someone has smartly and correctly told Eric Trump to start combing his hair to the side and not slicked back.” — IJReview’s Kate Bennett.

“From Melania’s speechwriter, ‘I wrote them down and later included some of the phrasing in the draft.’ Deliberate or not, still plagiarism.” — Katty Kay, BBC.

And Malania’s plagiarist says she’s NOT a Democrat

“I am NOT a registered Democrat. That is one thing the media reports have gotten completely wrong. Another reason for me to break my silence.” — Trump campaign’s in-house writer Meredith McIver.

Vox’s Matthew Yglesias is not a Donald Trump fan

“Of all the possible reasons to vote Trump, sincere belief that he will scrupulously adhere to government IT protocol has to be the craziest.” — Vox Executive Editor Matthew Yglesias.