Nasir Khan tentatively asking a prison guard if he should fear for his life set the stage for yet another grueling hour of HBO’s riveting, timely limited series. 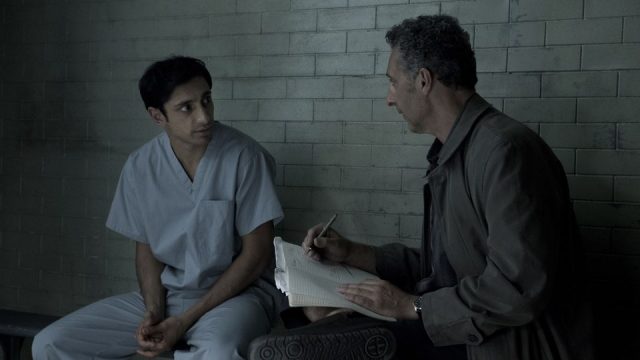 Where “The Night Of” succeeds most is in its unwavering, propelled anxiety. Week three matched its previous outings’ anxiety standards.

Seemingly trivial or unimportant threads from the previous two episodes lingered into this third hour, suggesting that no detail is meaningless. Take the cop who threw up at the crime scene and wants it stricken from the record. Box wants to keep it in, reminding him and his partner that it adds humanity to the circumstances of the crime, that like both Naz and Andrea Cornish, this cop is a human too. This theme echoed the walls of Rikers Island as well, though in malformed manifestations (more on that later).

John Stone goes to the Khans and offers them a flat fee of $75,000 if the case goes to trial, and half that if it doesn’t (likely in a plea deal). He eventually lowers this down to $50,000 and wants them to sign a retainer, though they are clearly ambivalent to this setup.

Both Naz and Stone are out of their elements. Naz is not a hardened criminal; Stone is a bumbling, ineffective lawyer. He’s peppered with questions about his feet, including one from prosecutor Helen Weiss, who gives him the contact information for a tailor to see before the trial. Ouch.

Meanwhile, remember how Salim Khan shared his cab with two other owners? They aren’t exactly happy the cab is MIA. Later, a cop tips them off to John Stone as a possible attorney to use charging Naz with grand theft auto, so they couldn’t be held liable for the cab’s use in the crime.

It also appears that the first conversation might not have been private. Someone photographed Salim as he was leaving the meeting with these two men. This surveillance thread carried over from the previous two episodes, though this time it focused heavily on the press.

Earlier in the episode, we see a lawyer speaking to the press in a courthouse, speaking for her client and manipulating a news anchor in the process. It’s unclear why until that same lawyer is seen in a coffee shop watching the police speak about Andrea’s murder. We also see the perspective of those watching in prison, the Khans watching at home and a prisoner named Freddy (who you might recognize as Omar from “The Wire”), who has a cushy room to himself adorned with newspaper clippings, posters and other memorabilia, watching on his personal TV. It’s this seemingly all-knowing perspective — yet the characters still only seeing the publicly available portion of the story — that makes Naz’s supposed innocence all the more infuriating.

Freddy takes a liking to Naz and has a guard give him shower shoes, and appears to offer him use of a cell phone. Keep in mind that we also see Freddy having sex with a female guard in another room of the prison, too. He’s in charge, though not immediately clear how or why.

Elsewhere, the Khans decide to pass on Stone and hire that courthouse lawyer from earlier, Alison Crowe, who brings along an Indian associate Chandra Kapoor on a house visit to the Khans. Crowe points out all Stone’s flaws, though Stone later points out to Kapoor that she was used as a prop for Crowe’s benefit. It’s not yet clear why Crowe wants to help Naz — a question he even asks his father — but regardless, she’s better equipped to handle the case. Naz breaks the news to Stone, though he offers to be of personal service to him anyway. At least his intentions seem pure, from what we know so far. His doctor’s appointment and eczema support group gave Stone personal character development that further developed and informed his professional struggles. In the spirit of the show, the two cannot be mutually exclusive.

Also telling? Stone’s visit to the crime scene, which included the return of Andrea’s cat. Stone, naturally, is allergic, so he takes it to the pound. If no one takes it, it will die in 10 days. The prison metaphor here is a little on the nose, but the audience won’t feel its impact until a bit later.

That’s where Freddy comes back in. He invites Naz to his room and eerily explains that the prisoners and the guards come from the same neighborhood, all like a family. He tells Naz the other Muslims aren’t going to like him and that prison has its own separate judicial system, that Naz has been judged and juried and it hasn’t turned out well in his favor.

When a guard brought Naz up to see Freddy, he dropped a package with him. Freddy tells him to close his eyes (Why he would ever listen to him, who knows, especially since a fellow prisoner warned him to keep his mouth shut a la Stone) and Freddy places Naz’s hand on what’s inside the package: veal.

That’s where the episode’s title comes into play: “A Dark Crate” is a reference to a calf waiting to be slaughtered — a clear allegory for Naz’s present situation. Freddy offers to protect Naz, though we don’t know Naz’s answer. That fellow prisoner from earlier tells Naz he has to let Freddy protect him.

And all of a sudden, it became clear why. Naz went up to use the bathroom, where all signs pointed to an altercation there (and a callback to a shower scene earlier where he kept looking behind his shoulder).

When he went back to his bed, it was on fire. Prisoners are staring at him, menacingly, and Freddy is watching it all from his room.

Freddy and Crowe’s roles in Naz’s life are strikingly similar: Both claim to have his best interest though have their own motives; Stone and Box’s moral compasses might be more on the straight-and-narrow (and ethics-abiding). The only truth we have is that Naz is in trouble, and the heart-pounding anxiety shows no signs of stopping.