After the recent brilliant move by Great Britain to exit the European Union, it was revealed which parts of the United Kingdom wished to leave the EU, and which bits wanted to stay.  What was most abundantly clear was that all of Scotland, not part of, or much of, Scotland, but all of it, was vehemently against exiting the EU and equally strongly wanted to remain part of Europe.

One political wag was moved to say he wondered what Hadrian knew 1894 years ago.

This was actually very funny because the individual in question, Hadrian, Emperor of Rome from 117 – 138, AD, was most well known for his construction of a latitudinal wall in Britain almost 2000 years ago which was meant to protect England from the vicious barbarian hordes of the north.  This is not very complimentary to the Scots, as it was their ancestors, the Picts, whom Hadrian was trying to keep out of the territory his Roman legions had occupied, er, conquered, no, colonized, or perhaps enslaved, oh, let’s settle on settled, originally in 43 AD. And this was really saying something, as there wasn’t anyone in Britain at that time in its history, except the Romans, who wasn’t an uncivilized barbarian.  For the Romans, it was only the Scots who were the unacceptable, or perhaps unconquerable, ones.  After some years of unpleasantness with the ferocious Picts, it was thought that a wall preventing their destructive forays into England would make the Romans’ Britannia a more enjoyable place to live – for the Romans, of course.

So, when Hadrian visited Britannia in 122 AD, he examined the possibilities and ordered the construction of a wall.   It was to go from sea to sea, would be approximately 80 miles in length, would be made of stone, would be approximately 15 feet in height and 10 feet wide, and would include intermittent forts in its construction.  Ditches on either side of the stone wall would be present at certain junctures of the wall, and turrets for observation purposes would be erected at intervals, as well.  At each mile there would be a gate, protected by a small guard post called a “milecastle.”

The wall was originally plastered and whitewashed, presenting a beautiful and impressive structure clearly “represented the might of the Roman Empire.”

Numerous adjustments to these measurements and aspects of the wall were made during the six years of the initial construction period of the project; also through the subsequent 9 years of the further construction that followed.  All in all, eighteen thousand soldiers worked on it, and 4 million tons of stone were used in its building.   It was said that “sons followed fathers guarding the wall,” and it served “as a frontier for several Roman incursions into Caledonia,” which was what the Romans called Scotland at the time.

All in all, this was a serious wall. 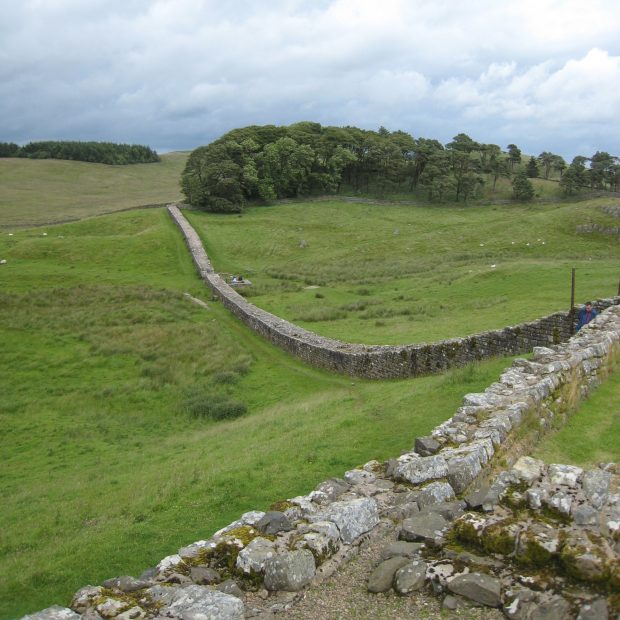 The Emperor Hadrian, who ruled Rome from 117 – 138 AD,  was the fourteenth Emperor of Rome, and  was the third of a group known as the Five Good Emperors ( the others were Nerva, Trajan,  Antoninus Pius and Marcus Aurelius), or, “those who ruled justly.”  This description was to imply that Hadrian was better than, say, the Emperor Caligula, who forced his horse to become a member of the Roman Senate, and murdered his pregnant (by him) sister by kicking her repeatedly in the stomach; or say, the Emperor Nero, who tied living Christians to stakes and lit them on fire so as to illuminate his nearby garden in the evenings, so the phrase, and praise, did have a relative aspect to it.

Hadrian was a rather fascinating character.  He was a Renaissance man – though the Renaissance wasn’t to occur for another four hundred years or so, he was so talented in so many ways that he basically defines the term.  The Emperor was an extraordinarily gifted architect and builder (he completely redesigned and rebuilt the Pantheon, among other notable structures); he was a brilliant administrator; a superb hunter; and he was so devoted to his Legionnaires (training, fighting, living and eating with them to the extent that almost no Emperor had done before), that he became beloved by his troops.   It is for the latter reason that the Emperor is most often depicted in military attire, even though his regime was “marked by relative peace.”

Hadrian, who also achieved exceptional intellectual heights, was a talented poet; a master proponent of  the Oracle at Delphi and equally adept at astrology; he also had an insatiable curiosity, (the Christian writer Tertullian called him an ‘omnium curiositatum explorator,’ i.e., an explorer of everything interesting); was an excellent political manipulator;  and was utterly ruthless in achieving what he set out to accomplish.  He also “revolutionized style in the empire by wearing a beard and setting a precedent for generations of emperors (it is actually said that Hadrian had had pockmarked skin in his youth and that it is why he affected a beard his entire adult life).  In 100 AD, he married Vibia Sabina, who was the grand-niece of the Emperor Trajan, whom Hadrian had succeeded; it was reputed to be an unhappy union.  They did not have any children.

The Emperor later did meet a young Bithynian (Greek) fellow named Antinous, a particularly beautiful human being, who became the love of his life.  They were devoted and obvious (the latter being unusual at that time in Rome) lovers for eight years, until Antinous was mysterious drowned in the Nile during a voyage to Egypt in 130 AD.  The Emperor was devastated by his lover’s death, and though he diefied Antinous, and had constructed many statues, temples, busts and even cities worldwide in his honor, Hadrian never recovered from Antinous’ death. Antinous was, in fact, the last of the ancient Roman gods, and the only gay Roman god.

Hadrian was the only Emperor to have travelled the whole of the Roman Empire.  During his reign, he actually spent more time away from Rome than he spent in it, which was one of the main reasons for his popularity among the Romans.   During these extensive travels, Hadrian saw the extent to which the Roman Empire had extended itself, and found it to be more than the new Emperor thought could be continued. So, the Emperor did the unthinkable as ruler of an empire which “had thrived on a policy of endless expansion and conquest.”  His first act as Emperor, therefore, hours after his coronation, was to withdraw his troops from Mesopotamia, (now Iraq), which had just been won by the newly deceased Trajan, and to “fortify the empire’s boundaries there and…in the Danube and the Rhine Valleys, (and elsewhere) ushering in a new era of peace.”

It has long been thought that the primary purpose for the wall Hadrian had built in England was to establish yet another boundary for the over-extended Roman Empire, and not just to demonstrate the still-awesome power of Rome, though it actually succeeded in doing both.

One of the more remarkable aspects of Hadrian’s Wall is that it succeeded.  It succeeded spectacularly, as it remained in force until 400 AD, and was thoroughly effective in keeping out of England the Picts and whatever other savage tribe that may have developed in the wilds of Caledonia.   The only reason the wall stopped working in 400 AD is because that is when the Roman civilization fell and the Romans abandoned Britain.

So maybe a wall protecting us from the southern hordes is a good idea after all – maybe Hadrian did know something almost 2000 years ago that certain of us are not sure of to this day.

Susan Smith brings an international perspective to her writing by having lived primarily in western Europe, mainly in Paris, France, and the U.S., primarily in Washington, D.C. She authored a weekly column for Human Events on politics with historical aspects.. She also served as the Staff Director of the U.S. Senate Subcommittee on Children, Family, Drugs and Alcoholism, and Special Assistant to the first Ambassador of Afghanistan following the initial fall of the Taliban. Ms. Smith is a graduate of Wheeling Jesuit University and Georgetown University, as well as the Sorbonne Nouvelle in Paris, France, where she obtained her French language certification. Ms. Smith now makes her home in McLean, Va.