Students at Elon University were so distraught at the thought of Pultizer Prize-winning columnist Kathleen Parker sharing her “dangerous” views in a lecture this October, they started a petition asking the administration to withdraw Parker’s invitation.

The university announced two months ago that Parker — a Washington Post columnist who won a Pulitzer Prize in 2010 — will deliver the Baird Pulitzer Prize Lecture on Oct 4. Some students on campus took issue with Parker’s columns as well as her book, “Save the Males: Why Men Matter Why Women Should Care.” In the book, Parker argues that modern feminism has become less about equality and more about declaring war on men.

In response, outraged students started the petition, which argued that Parker should be kept off campus because her written opinions are “dangerous” and demonstrate “undoubtable bias against women, sexual assault victims, and people of color.” (Parker, it’s worth noting, isn’t exactly right-wing — just last week she compared Donald Trump to Hitler.)

Some students took to Twitter to voice their opposition to Parker’s appearance on campus. 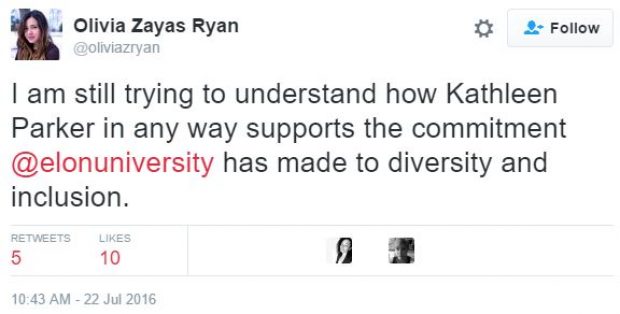 One student, who identifies herself as a journalism major in her Twitter profile, wrote: {I am still trying to understand how Kathleen Parker in any way supports the commitment [Elon University] has made to diversity and inclusion.”

Another student wrote: “not only does Kathleen Parker’s work promote anti-feminist arguments, but does so under the guise of intellectualism.” Another student accused Parker of being a “rape apologist.” 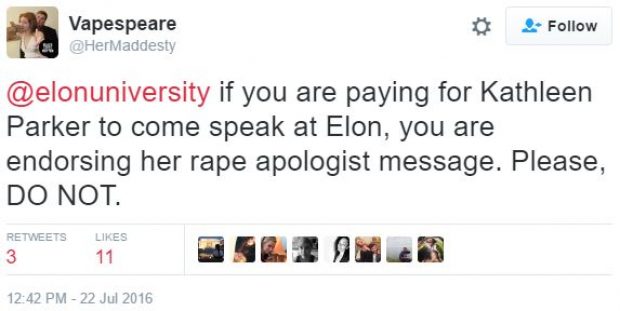 One male student tweeted at Parker directly to tell her: “We don’t want you at our school.”

Dear #Elon students – I look forward to speaking w/you this fall about life, love and politics. I’m confident we’ll learn from each other.✌

“Dear #Elon students – I look forward to speaking [with] you this fall about life, love and politics. I’m confident we’ll learn from each other,” she wrote.

The petition, which garnered over 300 signatures, ultimately failed.